The former Spiritual Director of the Adoration Ministry, Ejike Mbaka, has spoken about the alleged prophecy of the presidential candidate of the Labour Party (LP), Peter Obi.

Father Ejike Mbaka denied speaking against Peter Obi, claimed the devil used people to blackmail him, and demanded an apology.

Fr Mbaka disclosed this while leaving for the Monastery on Wednesday in obedience to church order.

“After handing over to Fr Amadi on Sunday, I started hearing that I spoke against Peter Obi,” he said.

“I never mentioned Obi. Please, whoever is being used by the devil to blackmail me in the name of doing any job for anybody is satanic, and they should apologise.’’

In June, the fiery preacher, in one of his sermons, kicked against Mr. Obi’s candidacy, describing the former Anambra governor as “stingy”.

“It is better to have a president who is a gifted old man than a young man with ‘gum’ hands,” Mr. Mbaka warned his parishioners.

“Do you want people to starve? If he becomes president, he will close our ministry.”

Mr. Mbaka soon apologised for the comments, which were trailed by criticisms.

Meanwhile, on Wednesday, the preacher urged church members to remain calm and pray for him, following the Enugu Diocese of the Catholic Church’s announcement of his movement to the monastery on Sunday.

The recommendation for Mr. Mbaka to spend time in solitude at a monastery hinged on the need to hear what the spirit of God had to tell him.

Some parish members had protested his removal as the spiritual director of the Adoration Ministry on Sunday, with reports saying they nearly mobbed the new priest, Anthony Amadi.

On his journey to the monastery, Mr. Mbaka said he would use the opportunity to bless everyone, adding that he was going to the monastery in obedience to the bishop of the diocese, Callistus Onaga.

“I want to assure you that God has plans for us for a future of hope and not of disaster. Use this opportunity to call on God for integral wellness and well-being of the adoration ministry that is the apple of God’s eyes,” Mr. Mbaka said. 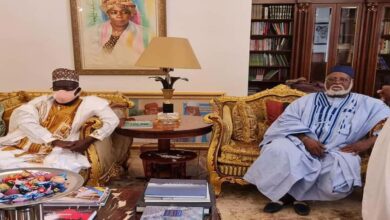