As the 2023 elections approach, many controversies are being created around the presidential candidates of the different political parties.

There has been a lot of talk about the candidates of the People’s Democratic Party (PDP) and the Labor Party (LP).

However, the story surrounding the All Progressive Congress APC candidate Bola Ahmed Tinubu has set the Internet ablaze, with various reactions emanating from him.

According to the infamous and faceless blogger Gistlover who gave a biography of BAT, the name Bola Tinubu was never given to the APC presidential candidate from birth. His birth name was Amoda Ogunlere.

He was born in Iragbiji in Osun state and bred in Ibadan, Oyo state until he left for Lagos just before Junior Secondary School. Being an ambitious, fearless, and notorious boy then, he went into the then dreaded Lagos Island, where he met Abibatu Mogaji, a drug dealer and the woman leader of the then Awolowo Action Group, who got interested in him and took him in.

As Gistlover continues his/her story, the elder brother of Abibatu, Kafaru Tinubu, just lost his daughter named Bola Tinubu, during the time Amoda was taken in by Abibatu. But before the death of Bola, a visa to the United States of America was acquired for her to go to school there, but unfortunately, she was unable to travel.

Abibatu, after appealing to her brother, took the travel documents of the late Bola, through her strong connections, was able to change the gender and photograph to that of Amoda, then sent him to the US with drugs. That trip started the birth of a drug baron and cartel by Amoda Ogunlere now known as Bola Tinubu.

The now Bola Tinubu had his first child, the late Jide Tinubu thereafter but he was warned by his drug mother not to have a family because it is dangerous for the job.

He got another lady pregnant who gave birth to Folashade Tinubu, the now Iyaloja of Lagos. As he prospered in his drug business, on one of his trips to the US from Lagos, he met an air hostess, Bunmi Oshonaike, who also got pregnant, refused to terminate the pregnancy as requested by Amoda, now Bola Tinubu, and she gave birth to Oluwaloseyi Tinubu, renowned first son of BAT popularly known as Seyi Tinubu who a right-hand man of his father.

After the birth of Seyi, the APC presidential candidate had made a name for himself in the drug industry and now stood a cartel of his own. Luck ran out of him on one of his trips to the US, but he luckily escaped to Nigeria, where he went underground and joined an oil and gas firm to cover his tracks. He then met his present wife, Balikis Oluremi Odugbesan, who he got married to in a bid to further stay low.

He got introduced to Remi, now Remi Tinubu, by her sister and the marriage produced three daughters- Abisola, Habibat and Olayinka Tinubu. According to Gistlover, Abisola and Habibat have been seen in the media but there have been conscious efforts to keep Olayinka away because she has mental issues, hence the reason why her name or pictures have never been posted anywhere on the media.

The faceless blogger has revealed that in a bid to keep his first name, Bola Tinubu transcribed Amoda to Ahmed, which is another form of the name, which he then added to his name, Bola Ahmed Tinubu. He/she added that there is more to follow but this is the story of how Amoda Ogunlere transcended in the now famous Bola Ahmed Tinubu, the former governor of Lagos state and the presidential candidate of APC.

Tags
According to the infamous and faceless blogger Gistlover who gave a biography of BAT Amoda Ogunlere Amoda Ogunleye bola tinubu the name Bola Tinubu was never given to the APC presidential candidate from birth. His birth name was Amoda Ogunleye 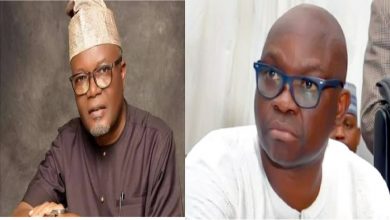 Herdsmen: Akeredolu of Ondo is an educated illiterate – Galadima