The Indigenous People of Biafra, IPOB, has reacted to the defeat of the federal government by the counsel to its leader, Ifeanyi Ejiofor at an Awka Federal High Court in Anambra State.

The court, led by Justice Nnamdi Dimgba, ruled in favour of Ejiofor, following the invasion of the lawyer’s home by operatives of the federal government.

This judgment came two years after security agents invaded Ejiofor’s home during the burial of his brother in Oraifite.

According to the Judge, the security operatives grossly violated the lawyer’s fundamental rights and consequently awarded the sum of N50m against the Nigeria Police, Nigerian Army and other security agencies.

The money is compensation for the gross violation of Ejiofor’s rights.

The court also awarded N2m as cost for the action against the Police and the Army.

Reacting, IPOB commended the Judge for delivering such a ruling against the Federal Government.

A statement by IPOB’s spokesman, Emma Powerful, reads: “We, the global family of the Indigenous People of Biafra (IPOB) under our great leader Mazi Nnamdi KANU commend all the fearless Judges who gave justice to all IPOB cases littered in all courts in Nigeria.

“We commend the recent judgement delivered in favour of the IPOB Counsel, Barrister Ifeanyi Ejiofor whom Nigeria Government and its compromised security agencies attacked and murdered his Personal Assistant, abducted others and burnt his personal car and country home at Oraifite Ekwusigo LGA of Anambra State.

“We commend the Judge who, without minding the intimidation from the Government of Buhari and his Fulani kinsmen, delivered a landmark judgment against Nigeria Government and her compromised security agencies and ordered them to compensate him for the evil they did to him.

The only crime that Barr. Ifeanyi Ejiofor committed was being a defence lawyer to IPOB and Mazi Nnamdi Kanu. Barr. Ejiofor is only doing his professional job as an Attorney, according to law. But he has always been harassed, intimidated, and threatened and has lost persons around him and properties worth millions from the Nigerian State in the course of doing his professional job.

“IPOB salutes men and women of the Bench who don’t yield to the oppressive government of Nigeria but delivered justice to IPOB members who have been illegally abducted, tortured, detained and denied freedom in many security detention facilities across Nigeria.

“IPOB will not forget to appreciate Justice Ademola of Abuja High Court, who gave justice to our leader Mazi Nnamdi KANU in 2015 that he committed no crime against any man or nation.

“This honourable Judge granted the unconditional release of our Leader Mazi Nnamdi Kanu in 2015, which unmasked the injustice that the current Judge, Justice Binta Nyako of Federal High Court Abuja, is trying so hard to mask again against Nnamdi Kanu.” 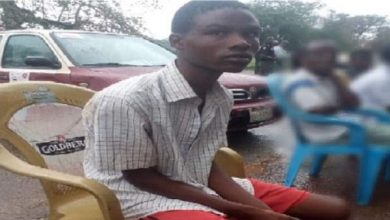 How I Raped, Killed Teenager Inside Church – Suspect Narrates