Kaduna State Governor, Nasir El-Rufai, has blamed the silence of President Muhammadu Buhari, for the decision reached by many delegates to vote for Bola Tinubu as the presidential candidate of the All Progressives Congress.

He said this while appearing as a guest on Channels Television’s Politics Today.

El-Rufai explained that Buhari asked the northern delegates to vote for any of the shortlisted five presidential candidates of their choice.

According to him, Buhari didn’t dictate how delegates from Kaduna State should vote at the APC presidential primaries.

While speaking Friday night, governor said, “In many of our states, the delegate votes were divided,” El-Rufai said.

“Before I went to address the Kaduna delegates for the last time, I went to the President and I asked him, have you decided on who we should vote for? He said, I told you, go and vote for any of the five (candidates selected by APC Governors)

“I said, Mr President, the Kaduna delegates are your delegates, you are going to retire and live in Kaduna. So you can tell me who you want out of the five, and the President said ‘I want all five’.

“I said, what then should I tell Kaduna delegates. He said, tell them to vote their conscience; they are representing 10 million people in Kaduna state. It’s a heavy responsibility, and they should discharge it and pick the best candidate.

“Now I don’t know how the Kaduna delegates voted, but the feedback I got after the voting is that most of them voted for Asiwaju, some voted for Amaechi and some voted for Professor Yemi Osinbajo.”

They asked their supporters to vote for Tinubu, just as the only female aspirant, Mrs Uju Ken-Ohanenye, followed suit.

Pastor Felix Nicholas, the United States of America-based aspirant also stepped down and asked his supporters to vote for Osinbajo.

A candidate, Chukwuemeka Nwajiuba, immediate past Minister of State for Education, was conspicuously absent at the convention. 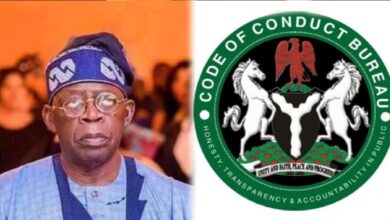