An High Court, on Monday, sentenced 40-year-old Sade Otenuga to 12 years imprisonment for defrauding the Deeper Life Bible Church of N620,000 in Ekiti

The court held that Sade deceived the church into paying her the money on the pretext that she owned a dilapidated structure in Ado-Ekiti which the church could buy and convert the land to better use.

The court also held that a pastor in the church, Oso Olugbenga, transferred the money to Sade’s bank account in two electronic transfers on April 6 and April 8, 2021.

Sade faced a two-count of Advance Fee Fraud and Stealing punishable under the laws of Ekiti State.

Testifying before the court earlier, Pastor Olugbenga said: “The church decided to buy the building, as it had become hideouts for criminals in the area.

“The convict also gave the church instruction to remove the building on the land, knowing full well that she was not the rightful owner.

“All efforts made to recover the money after the church discovered fraud in the transaction proved abortive.’’

Led in evidence before the court, Sade confessed to have committed the offence.

Sade’s counsel, Yinka Opaleke, did not call any witness, but pleaded with the court to temper justice with mercy.

Delivering judgment, Justice Lekan Ogunmoye said there was prescribed mandatory sentence for the offence and the court had no discretionary power to exercise in the matter.

“The sentences are to run concurrently,’’ Justice Ogunmoye said. 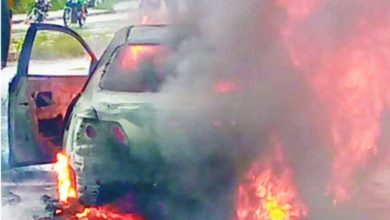