The President of the federal republic of Nigeria, Muhammadu Buhari, on Thursday, explained to the Federal High Court sitting in Abuja, why he kicked against section 84(12)of the amended Electoral Act, 2022.

President Buhari, in a counter-affidavit he filed for the dismissal of a suit that was lodged against him by the opposition Peoples Democratic Party, PDP, insisted that the contentious section of the Electoral Act, would disenfranchise political appointees and prevent them from engaging in the electoral process in the exercise of their inalienable rights in a participatory democracy.

The President, in the process he filed through the office of the Attorney General of the Federation and Minister of Justice, Mr. Abubakar Malami, SAN, stressed that though he expressed his concerns and reservations about the said portion of the amended electoral law, he, however, did not at any time, ordered the Senate to delete it.

He told the court that though he was not comfortable with the said section, he went ahead and assented to the Electoral Act, in view of the impending general elections.

“The assent of the 1st defendant (Buhari) to the Electoral Bill given on February 25, 2022, was proper, full and unconditional.

“The 1st defendant assented to the Electoral Bill 2022 on February 25 but did not give conditions or directives to the National Assembly in the manner erroneously deposed to by the plaintiff (PDP).

“At no time did the 1st defendant give any directive to the management or leadership of the National Assembly as regards the removal of section 84 (12) of the Electoral Act 2022, from the Act.

“Prior to assenting to the Electoral Bill 2022, the 1st defendant merely expressed his observations and concerns about the constraints of section 84 (12) of the Bill on serving public office holders and political appointees but gave his assent to avoid further delay as time was of the essence.

“That the 1st defendant merely expressed his views not only to the National Assembly but to the entire nation as regards the inconsistency of section 84 (12) of the Electoral Act with other provisions of the Constitution.

“On March 8, 2022, 1st defendant officially wrote Senate President and House of Representatives Speaker to express his concerns about section 84 (12) of the Electoral Act and formally requested for an amendment to be effected on the section so as to eliminate the area of infraction with the Constitution.

“That I am aware that the National Assembly neither accepted nor acted on the opinion or suggestion of Buhari.

“In this instance, 1st and 2nd defendant, (Buhari and Malami), truly and firmly believe that section 84 (12) of the Electoral Act disenfranchises and discriminates against Nigerians in public service or public office holders who are political appointees and prevent them from engaging in the electoral process in the exercise of their inalienable rights in a participatory democracy.

“That 1st and 2nd defendant have never taken it upon themselves to declare section 84 (12) or any provisions of the Electoral Act unconstitutional as such is beyond their constitutional power”, the court process read.

More so, both Buhari and Malami drew the attention of the court to the judgement of a Federal High Court in Abia State, who they said had in March, struck down the section and ordered that it should be deleted for being inconsistent with the Constitution.

The two defendants noted that both the National Assembly and the PDP, have since lodged an appeal against the judgement, even as they contended that only the Court of Appeal could restore the section into the Electoral Act and not any high court.

Insisting that the suit by the PDP had turned academic and constituted an abuse of the court process, Buhari and Malami, therefore, sought its dismissal.

They argued that PDP should not be allowed to take over the functions of the National Assembly since it has no power to amend or enact the law.

Buhari and Malami also averred that PDP has nothing to suffer if the contentious section is deleted, adding that removing the section will deepen the practice of democracy and stop discrimination against public servants and public officeholders.

Meanwhile, Justice Inyang Ekwo adjourned the suit marked FHC/ABJ/CS/ 247/2022, till May 16 for a hearing.

It will be recalled that PDP had approached the court for an order to restrain the National Assembly from tampering with the newly amended Electoral Act 2022.

It argued that President Buhari, having assented to the Bill, could no longer give any directive to the National Assembly to take immediate steps to remove the section or any section of the Act on any ground whatsoever.

Plaintiff wants the court to declare that Buhari’s power regarding lawmaking is limited to assenting to a bill of the National Assembly or withholding assent, and does not extend to giving conditional assent.

The PDP further wants the court to hold that Section 84 (12) is constitutional and liable to be enforced by INEC which is the 8th Defendant in the suit.

It prayed the court for a declaration that Section 84 (12) is not inconsistent with or contradicts Sections 40 and 42 of the Constitution and does not offend Constitutional provisions on disqualification of a person from election to office.

It applied for an order of mandatory injunction compelling INEC to put into immediate effect the Electoral Act, including the said Section 84 ( 12).

Following an ex-parte motion that was brought by the plaintiff, the court, in a ruling on March 7, restrained the National Assembly from tampering with any section of the Electoral Act 2022, pending the determination of the suit.

Section 84(12) of the Electoral Act made it mandatory that political office holders must firstly resign from office before they could vie for any elective position.

It reads: “No political appointee at any level shall be a voting delegate or be voted for at the convention or congress of any political party for the purpose of the nomination of candidates for any election.”

President Buhari had before he signed the Electoral Act Amendment Bill 2022 into law, expressed his reservations with that portion of the law which he described as discriminatory. 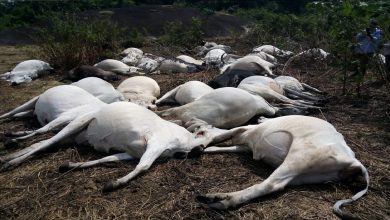 Most Bandits Are Fulani, Who Profess The Same Religious Beliefs As Me – Gov Masari

2023 presidency: I’m not interested in any Political position only if Buhari insists – El-Rufai