President Muhammadu Buhari on Tuesday revealed why insecurity still persists and is difficult to combat in the country.

Buhari says that without massive and popular support for the “hardworking” Armed Forces, Nigeria will take much longer to finish the “successful” war being waged against terrorism, banditry and kidnapping.

He said this Tuesday at an iftar dinner with members of the business community and the leadership of political parties.

Buhari implored all political parties in the country to join his administration’s drive to defeat insecurity.

The president, who urged the political parties to keep elections and election-related differences aside, described insecurity as a ‘‘common enemy’’ bedeviling the country.

“Our country must be kept safe for progress and prosperity to be entrenched.

‘‘I look forward to seeing the reflection of this spirit in the relationship between the parties and the government, especially as the electioneering season will soon be on us,’’ he said.

The president, while speaking on ease of doing business in the country, told captains of industry and political leaders at the dinner that his administration had done exceedingly well in improving the business climate.

He urged the private sector to complement government’s effort in poverty reduction and job creation for the young people.

Senator Abdullahi Adamu, the National Chairman of APC urged leaders of political parties to make firm commitments towards peaceful and successful 2023 general elections, and challenged them to work in unison to achieve the purpose.

Speaking on behalf of leaders of other political parties, Engr. Yusuf Yabagi, the chairman of Action Democratic Party (ADP) and coordinator Inter-Party Advisory Council (IPAC) who described the President as a true democrat, said the Iftar event and the invitation by the President had introduced ‘‘credibility, respect and admiration in the polity’’.

He announced that IPAC was preparing to give the President an award as ‘‘Hero of Democracy’’, citing the historic signing into law of the Electoral Act that will guarantee peaceful, acceptable and all-inclusive elections in the country.

On the forthcoming elections, Yabagi said: ‘‘Mr President, history beckons on you. 2023 is going to be your glorious exit. That is our prayer and for that to happen you have to take charge of every activity that matter in the exercise’’.

The IPAC Coordinator, who commended INEC for innovation and reforms towards ensuring credible elections, appealed to the President to look into the role of security agencies in the forthcoming general elections.

‘‘Members of IPAC are worried by the programme of INEC that elected candidates will spend 10 months campaigning around the country. That is a herculean task.

‘‘We also want the President to consider the appointment of a Political Liaison Officer,’’ Yabagi said, noting that the office will ensure better coordination between the President’s office and political parties.

Buhari In Court For Stealing 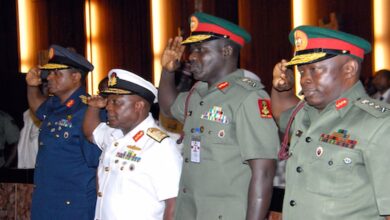