A graduate of the Osun State Polytechnic, Iree, Owolabi Abidemi, has been declared missing by her relatives.

The polytechnic graduate’s boyfriend, Segun Paul, described Abidemi as a calm and gentle lady, who doesn’t lie to him, adding that she always inform him about anywhere she’s going.

Paul said, “She will inform me about anything, initially, but when the incident happened, after calling some people, what I heard is different from what she told me and with that, I can’t give account of who she is presently.

“Abidemi told me she is going to Lagos State that her grandma lost her sister (grandma’s sister) and she want to follow her for the burial, which she did the following day. But she did not told me that she is going with her friend Blessing but I later heard that from a woman living around her hostel.”

He added, “Her number was not reachable,for over many weeks, she’s not online, same as her friend’s number. A friend of mine that always update me whenever they see each other in Ekiti State, her place, said Blessing told him they were going to a party and Abidemi told me she was going to Lagos State”.

In the same vein, her friend Olorunlogbon Suliyat Oyindamola who they’ve lived together in Ilorin said they called her two lines and it was not reachable.

“We departed early February and that was the last time I saw her. Weeks back, I called her and the number was reachable but later, it was not reachable again. Everybody started calling her likewise her mother also but was not reachable. Afterwards, we realized that something is going on,” Suliyat added.

She noted that the case would soon be reported to the police.

In a phone conversation with her mom, she confirmed that her daughter had been declared missing, called on Nigerians to help the family in the search for Abidemi.

Meanwhile, an emergency number was released by her friend, +234 806 489 1984(Her Mum’s Number) in search of the missing polytechnic graduate. 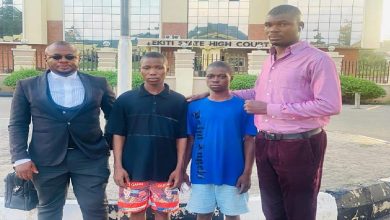