According to the 62-year-old former governor, the idea of consensus is undemocratic, adding that both Atiku and Saraki were All Progressives Congress runaway politicians who came back to the PDP when the going was rough for them in the APC.

Saraki, from Kwara State in North-Central Nigeria, has been going around, spearheading the move for a consensus candidate amongst PDP northern aspirants including Bauchi State governor, Bala Mohammed; as well as his Sokoto State counterpart, Aminu Tambuwal.

However, Fayose insisted that it was the turn of the South to govern Nigeria in 2023 and not another northern president to replace Major General Muhammadu Buhari (retd.), who is from Katsina State in Nigeria’s terror-ravaged North-West zone and whose two-term tenure would elapse in May 2023.

He said it is the South that should be mouthing the idea of a consensus candidate and not the North.

The ex-Ekiti governor said, “I saw those going around for consensus. Who will step down for who? You ask me to step down? I won’t step down.

“They said they want all of us to come for consensus. I have taken form today; I am not going to step down. Who knows if it is me Nigerians want to vote for? Do you know the minds of Nigerians?

“I will go to that election; I won’t step down. Any meeting that they want to talk about consensus, as good as that language looks good, it is undemocratic.”

“Let them choose me (as consensus), that is the only solution,” Fayose added.

About 13 aspirants have reportedly purchased the PDP presidential nomination form.

Aside from northern politicians, some southern stalwarts including former Senate President and Secretary to the Government of the Federation, Pius Anyim; Rivers State Governor, Nyesom Wike; ex-governor of Anambra State, Peter Obi; media personality, Dele Momodu, amongst others have expressed interest in clinching the PDP’s 2023 presidential ticket in the primary which is expected to hold later in May. 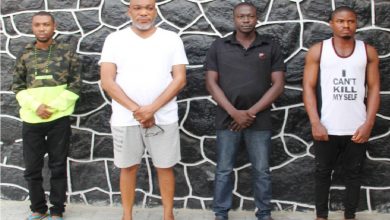 We are suffering, hungry, we need our November salary – Policemen