A Police Inspector, Michael Timitimi, who was attached to the Bayelsa State Police Command at the weekend slumped and died during the burial rites of his grandmother in Igbedi community in Kolokuma\Opokuma Local Government Area of the State.

The deceased inspector was attached to the State security outfit, the State Vigilante Service and Bayelsa Volunteer Force until his death.

Eyewitness reports said that he slumped and died shortly after dancing fitfully at the wake keep in honour of his grandmother.

A visit to the headquarters of the Bayelsa vigilante showed that the workers were shocked and left in tears after the news of the police inspector’s death was relayed.

Chairman of Bayelsa State Volunteers, Mr Oyinkuro Lucky Asanakpo, and the leadership of the agency had already paid an unscheduled condolence visit to the family of the inspector.

Speaking during the condolence visit, Asanakpo recounted how the deceased had visited him last Thursday to intimate him about the grandmother’s demise and to invite him for the burial rites.

He recalled how the officer would accompany him alongside other officers on midnight raids of red-light districts and criminal hideouts in Yenagoa.

He went further to console the wife and children of the late officer, promising that the agency would be with the family all through the burial arrangements.

Asanakpo prayed that God will grant the family the fortitude to bear the loss.

The elder brother of the deceased, Mr Enetimi Timitimi, thanked the visitors for the visit and promised to keep the chairman posted on further developments as regards the burial of the late officer.

The police spokesman in Bayelsa State, SP Asinim Butswat, who confirmed the cop’s death, said he had some health challenges and died in the hospital where he was taken to when he slumped. 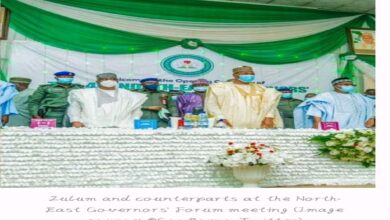 Deradicalised Terrorists Are Evil, They Rejoin Boko Haram After Spying On Communities- Zulum