The National Publicity Secretary of Afenifere, Jare Ajayi, said this when contacted for his reaction to the development on Monday.

He said, “Afenifere and indeed Yoruba people as a whole are very happy that the Yoruba Nation agitator has been released.

“Sunday Adeyemo Igboho’s release is not just for him and the Yoruba people. It is a victory indicator for all those who believe in personal liberty and the right of a given people to self-determination.

“Afenifere commends Prof Banji Akintoye, Prof Tunde Adeniran, Ilana Omo Oodua, and Yoruba Obas in Nigeria and in Benin Republic for their efforts in seeing that Igboho is set free.”

The group also commended the team of lawyers handling his cases in Nigeria and in Benin.

However, Igboho will not leave Cotonou, Benin Republic, despite his release from detention in the country.

His counsel, Chief Yomi Aliyyu (SAN), said this in a message sent to one of our correspondents on Monday.

Aliyyu said Igboho was released to his medical doctors with the agreement that he would not leave Cotonou for any reason.

He said, “I am to inform you that Chief Sunday Adeyemo, aka Igboho Oosa, has been released from prison to his medical practitioners under the agreement that he should not leave the medical centre or Cotonou for any reason.

“Praises should be given to two prominent Yoruba personalities to wit; Prof Wole Soyinka and Prof (Banji) Akintoye, for this turnaround in our client’s matter.”

The PUNCH learnt that the 49-year-old activist might not return to Nigeria till May 2023 after the expiration of the regime of the President, Major General Muhammadu Buhari (retd.).

He was freed on medical grounds after months of diplomatic meetings with the government of President Patrice Talon by Yoruba monarchs and others at home and in the Diaspora.

In a statement on Monday by Akintoye’s spokesman, Maxwell Adeleye, said Igboho was released by the Benin Republic government on Monday and handed over to the emeritus professor and his deputy, Wale Adeniran.

Akintoye, who had earlier said he relocated to Benin Republic to secure Igboho’s freedom, described the release of the activist as a triumph of truth over darkness in Yorubaland.

It read in part, “The Yoruba Nation activist, Chief Sunday Adeyemo, fondly called Sunday Ighoho, has been released by the Government of Republic of Benin.

“In a statement by the Communications Secretary of Ilana Omo Oodua Worldwide, Mr Maxwell Adeleye, Akintoye described the release of Ighoho as a triumph of truth over darkness in Yorubaland.”

Adeleye, however, said Igboho would remain in Cotonou till further notice.

When asked if Igboho would continue his trip to Germany, Adeleye stated, “He (Igboho) is remaining in Cotonou. He was freed on medical grounds as no case was preferred against him. Asides, he had been detained for more than six months, which is contrary to the law.”

The Department of State Services had raided Igboho’s Ibadan residence on July 1, 2021, killed two of his aides and arrested 12 others, who were later released after spending months in detention at the secret police’s headquarters in Abuja.

Declared wanted by the DSS for allegedly stockpiling arms to destabilise Nigeria, an allegation he denied, Igboho escaped to the neighbouring Benin Republic in July 2021

However, luck ran out on him when he was arrested by Interpol around 8pm on July 19, 2021, at the Cadjèhoun Airport in Cotonou, when he tried to board a Germany-bound aircraft alongside his wife, Ropo.[b][/b]

He was remanded in a prison in Cotonou and is facing trial for immigration-related offences, among others. 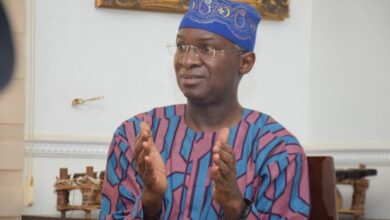