A video of a police orderly holding a plate of food for his “madam”, Ambassador Nimota Akanbi, at a party has gone viral.

Akanbi is the chairman of the National Senior Secondary Education Commission (NSSEC).

She is also a former Nigerian Ambassador to the Netherlands.

The event was said to be a Turbaning ceremony held in Ilorin, Kwara State during the weekend.

In the video, the officer identified as Yahaya Abubakar was seen carrying Akanbi’s plate as she went about dishing food from the array of food provided at the party.

Meanwhile, some Nigerians on social media have expressed disgust at the manner police officers willingly offered themselves to be used by the rich, while remarking that such a scenario brings disrespect to the force.

They also faulted the top echelon of the force for prioritising the security of a few wealthy people while the poor masses who are in need of protection from robbers and criminals are left unattended.

Below are some comments:

@edoyakulo, “The painful part is that Mr. Police may not taste any of those delicacy. Just salivate while others feast”.

@walegates, “Dear @PoliceNG this is what your officers have been reduced to??, lack of security personnel on the streets but carrying food for oga Madam… Shame!!!

@eyiteeonline, “That’s not a policeman but a domestic staff with police attire.

@G4cHaMp, “@PoliceNG there are terms and conditions that prevent policemen being used for demeaning tasks such as this when assigning officers to “VIP’s” ….why is this being allowed to happen??

@Enigma_Gpes, “Now you know the police is their errand boys. For a learned person enslaving another, this is appalling. 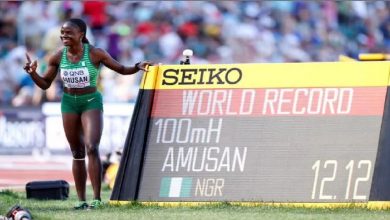