He believes the nature of terrorism in the Northwest is far more vicious than the Boko Haram insurgency in the Northeast.

He said preliminary investigations revealed that some security operatives were working for terrorists.

The governor reiterated that the only answer to ending terrorism in all its forms is by total elimination.

He said terrorists, especially those involved in banditry and kidnapping, have adapted their crime forms into a business, with a financial turnover, their original trades in cattle breeding could not generate.

El-Rufai said the effort to tackle the menace had been uncoordinated.

He said some governors thought negotiating with the criminals would solve the problem but realised that it was a mistake.

On whether the terrorists collude with security agents, El-Rufai said: “Yes, we are concerned and it is not impossible to have infiltrators.

“The preliminary report of Boko Haram financing also showed some links to bandits and pointed to some police and military officers in service as having some communication or connection with the bandits.

“So, there’s always that risk. In any system you have traitors and we’re concerned about that. But to date, we don’t have any firm evidence of that. I think a lot more work needs to be done.

“We need to pursue the financing and logistics chain of banditry as well because the amount of money these bandits are making is enough to destabilise this country. It is a lot of money.

“We only have an idea of what it is because those that make the payments don’t tell us the truth all the time, but we hear from the legal intercepts of the conversations about how much money they are asking for, how much they have received and so on.

“The numbers are mind-boggling. It’s a major source of national insecurity and it will grow unless it is decisively dealt with. So, yeah I am concerned.”

He believes the security situation in the Northcentral is far worse than the Northeast.

El-Rufai said: “I am persuaded that the insurgency in the Northwest is far more lethal, far more serious than Boko Haram, both in terms of the numbers of people affected.

“As you can see, this is just Kaduna numbers, one or two years. I can assure you the numbers in Zamfara and Katsina are two to three times this if they are keeping tabs.

“The numbers in Sokoto, Niger and Kebbi will be about this. So, we are talking of tens of thousands of people getting killed, getting kidnapped. It is far more serious than Boko Haram.

“The only thing is that these guys don’t take territories. They are in the forests, ungoverned spaces.

“So, they do not attract the same kind of single-minded attention that Boko Haram does and because Boko Haram’s ideologies are religious or contentiously religious, you know, it elicits more passion.”

He said the state government established the peace commission so as to end the conflicts unsettling Southern Kaduna, emphasising that true peace will not be achieved without dialogue.

He said the state has also invested a lot into technology to fight crime, adding that some of the gadgets procured had assisted the state to locate the hideouts of the criminals.

The governor believes the strength of the entire police and armed forces is far below the need of the country.

He noted that in some cases, the criminals wield more powerful firearms and ammunition.

The governor said he was not keen to run for another political office at the end of his tenure.

“I’m not an ambitious person. I’m just a person that gets things done when given the opportunity and that’s why I’ve never lobbied for a job, I’ve never desired to.

“Even this governorship, it was President Buhari that literally forced me to run. I wasn’t interested in it. I just wanted us to defeat (former President Goodluck) Jonathan and I’ll come to the Villa and be enjoying myself.

“I would have been one Special Adviser (Domestic). Anytime they are flying to New York, I’m there. That is the life and I would not have had grey hairs.

“But the President insisted that some of us must go and run for governorship, just in case he did not get elected again. He felt that we needed some strong governors, those were the words he used.

“So, I was forced into this. I’ve never desired to be Minister of FCT. (Former President Olusegun) Obasanjo just called me and said I am appointing you. I’ve never wanted to be DG of BPE, I was called and given. So, I have zero ambitions. I have no aspirations”, he said. 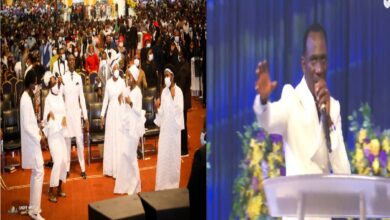