They were arraigned on October 20, 2017, by the Police on two counts bordering on conspiracy and armed robbery.

Delivering judgment on Thursday, Justice Peter Kekemeke, held that the prosecutor proved his case by calling four witnesses and their evidence corroborated the prosecutor’s case beyond any reasonable doubt.

Kekemeke held that the evidence before the court proved that, there was a robbery by the defendants and they were also armed.

He added that there was an admission of guilt by the defendants and no evidence was stronger than their own admission.

The prosecution counsel, Kufureabasi Ebong, had told the court that on January 17, 2017, at about 1:00 am, the defendants (police officers), were dressed in their uniforms as they robbed one Christe Maker of her personal belongings while coming from the Abuja airport.

He added that the offence contravened the provisions of sections 6 and 1(2) of the Robbery and Firearms (Special provisions) Act, 2004. 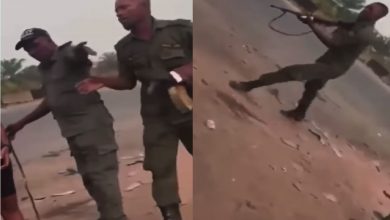