The Independent National Electoral Commission (INEC) has rejected the outcome of the primary election conducted by the Boot Party (BP) to elect its candidate for the Ekiti governorship election.

The Commission said the party will not nominate a candidate for the June 18 governorship election.

INEC Chairman Professor Mahmood Yakubu, who disclosed the position of the electoral umpire, during the Inter-Agency Consultative Committee on Election Security (ICCES) at the Commission’s Headquarters, observed that the party’s governorship primary was not monitored by INEC.

According to Yakubu said: “From our field report, the Boot Party (BP), did not hold its primary at any venue known to, and monitored by the Commission.

“Consequently, we do not expect the party to nominate a candidate for the Ekiti State governorship election”

Yakubu Dogara speaks about defection, reveals why he dumped PDP for APC 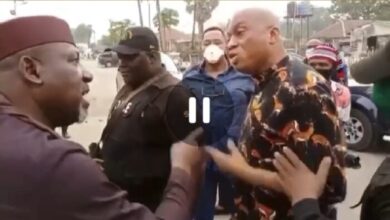 Video: How I Was Attacked By Thugs, Police- Rochas Okorocha