The General Overseer of the Living Faith Church, popularly known as Winners Chapel, Bishop David Oyedepo, has been attacked by a strange man.

It was gathered that the strange man beat the security of the church before approaching the pulpit of the church in Canaanland, Ogun and attacked Oyedepo.

The strange man attacked the popular cleric, two Sundays before the church started the Shiloh Programme.

According to the PM news reported that the intruder came through the Love wing entrance of the church and tactically, was able to access the altar while Oyedepo was preaching.

There was a lapse in security as the huge crowd at the fourth service saw the strange man in a white suit, make his way to the altar.

In a video, the man held Bishop Oyedepo on one of his legs and was dragging him and would have brought him down before the security officers quickly intervened.

The security men and some leaders on the altar, including Oyedepo’s son David had to forcefully pull the man away from the Bishop to prevent him from falling on the altar.

The man was bundled out of the church and was given the beating of his life by Oyedepo’s security operatives.

Since that ugly incident, security had been beefed up in the church and it was tighter at the just concluded Shiloh.

The security operatives who were on duty when the incident occurred have been changed. 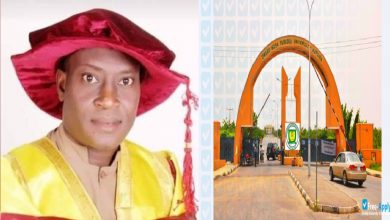 Yar’Adua University VC To Girlfriend: ‘If You Spill The Beans, You Won’t Graduate’

Insecurity: We may have to engage in a dialogue with bandits- NGF, Gov Fayemi