Abuja, Nigeria 20th July 2021 – A new public opinion poll conducted by NOIPolls has revealed that 8 in 10 adult Nigerians do not support the scrapping of the National Youth Service Corps (NYSC) and there are more Nigerians from the North-East zone (88 percent) who made this assertion. This is in line with the position of the Sultan of Sokoto, Sa’ad Abubakar, who spoke when he hosted some selected members of NYSC Batch A stream 2 Corps members posted to Sokoto state in his palace in May 2021. The emir further explained that the NYSC scheme was established to foster the nation’s unity and strengthen ties among Nigerians. According to him, the NYSC scheme is the most needed programme in view of the present situation when Nigeria is almost divided along ethnic and religious lines.[2]

More findings revealed that out of the 80 percent who do not support the scrapping of the scheme, a larger proportion (30 percent) believe that the scheme encourages cultural integration in the country. While 27 percent consider it to be an avenue for exposure and self-development, 17 percent believe it helps the youths in various ways. However, of the 13 percent of Nigerians who support the scrapping of the scheme, 56 percent based their reason mostly on current security challenges in the country.

The poll results further indicated that most Nigerians (83 percent) who were interviewed admitted that the scheme has met its objectives of fostering National Unity in the country. Interestingly, 83 percent stated that graduates do benefit from the scheme and when probed further, monthly allowance (30 percent), intercultural relationship (17 percent), and self-development (12 percent) were the three top benefits mentioned amongst others.  In a country where some families toil day and night to make ends meet, the impact of the N33,000 monthly allowance paid to Youth Corps members cannot be undermined considering the adverse effect of scrapping the scheme.

With regards to modifying the scheme, 24 percent of adult Nigerians would like the scheme to be modified in such a way that the corps members get employed immediately after their service year. Therefore, rather than scrapping it, the government and concerned stakeholders should laisse with private companies and organizations to gainfully employ a certain percentage of Youth Corps members after completing their service year. These are some of the key findings from the NYSC poll conducted in the week commencing 12th July 2021.

The NYSC service was created as a federal government response to the gulf of divide and disunity that existed amongst Nigerians after the 30 grueling months of the civil war, which gulped thousands of lives and left in its wake wanton destructions of properties of monumental proportions. The cardinal reason for the creation of the service scheme is to heal the wounds the nation is nursing as an effect of the unfortunate and undesired civil war. It was meant to reconstruct, reconcile, and rebuild the country after the Nigerian Civil war.

The NYSC service scheme was created on the 22nd of May 1973 by decree No.24 which stated that the NYSC service scheme is established “with a view to the proper encouragement and development of common ties among the youths of Nigeria and the promotion of national unity”. The scheme has the primary purpose of inculcating in Nigerian Youths the spirit of selfless service to the community, and to emphasize the spirit of oneness and brotherhood of all Nigerians, irrespective of cultural or social background.[3]

After more than four decades of the establishment of the scheme, the debate has always reared on whether the scheme has achieved its aim or not and if there is a need to scrap the NYSC and replace it with another scheme. It is, however, a matter of debate in the National assembly if the scheme should be scrapped or not. The proponents of the scrapping are sighting issues of insecurity, unemployment, influencing posting among corps members as some of the reasons for the scrapping of the scheme while those opposing the scheme are citing the gains of fostering unity amongst Nigerians which the scheme has achieved over the years, as the reason why the scheme should continue to exist.

It is indeed common knowledge that corps members are now posted to states within the region of their origin thereby questioning the issue of fostering unity which the scheme seeks to achieve. “If you cannot be posted out of your region due to insecurity, then why mobilizing people for the scheme and where is the unity the scheme seeks to achieve?” queried a concerned citizen. Whether or not the service scheme will be scrapped is left to be seen but the debate rages on and Nigerians of different walks of life are sharply divided amongst the lines of scrapping or not. In the heat of the debate, NOIPolls conducted a poll to gauge the opinions of Nigerians regarding the 1-year service scheme.

To enable Nigerian youths, acquire the spirit of self-reliance by encouraging them to develop skills for self-employment. To contribute to the accelerated growth of the national economy. To develop common ties among the Nigerian youths and promote national unity and integration.[4] Given the above, 83 percent of adult Nigerians interviewed disclosed that the NYSC scheme has met its objectives especially in fostering National Unity in the country.

With regards to the benefit of the scheme, 83 percent of adult Nigerians admitted that the Nigerian graduates benefit from the NYSC scheme after graduating from the University. Nigerians residing in the North East (90 percent) had more respondents who indicated that the NYSC scheme is beneficial to graduate. Also, respondents who did not participate in the 1-year NYSC program are more (89 percent) than those (80 percent) who have gone through the scheme.

Subsequently, the poll result revealed that monthly allowance (30 percent) is the main benefit of the NYSC scheme as mentioned by 30 percent of the respondents who indicated that there are benefits from the scheme. Other mentions include intercultural relationships (17 percent), self-development (12 percent), promotes national unity (10 percent), and access to various opportunities amongst other benefits.

Further probing revealed that out of the 80 percent, a larger proportion of adult Nigerians (30 percent) who do not support the scrapping of the NYSC scheme believe that the scheme encourages cultural integration. While 27 percent consider it to be an avenue for exposure and self-development, 17 percent believe it helps the youths in various ways. Other reasons include gaining work experience (11 percent), adaptation (10 percent), and completing the educational process.

Of the 13 percent who supports the scrapping of the scheme, 56 percent mentioned security challenges as the main reason why they want the NYSC to be scrapped. While 24 percent stated that the scheme has no benefit, 10 percent say it is of no use as well as a meager 6 percent who mentioned that the welfare packages are very poor.

When asked: if the NYSC were to be modified, what are some of the changes you would like to see? The finding revealed that 24 percent of adult Nigerians would like the scheme to be modified in such a system that the corps members get employed immediately after their service year. This is closely followed by 23 percent who mentioned that corps members should be posted for the 1-year scheme within their geopolitical locations.

In addition, 13 percent were concerned about the specialization of the graduates as they stated that corps members should be posted to organizations relevant to their discipline. it is also, worthy to note that 1 in 10 adult Nigerians (10 percent) clearly mentioned that the 1-year national service should be modified to be made optional.

In conclusion, the poll has revealed that most Nigerians do not support the scrapping of the NYSC scheme mainly due to cultural integration. Asides the 83 percent assertion that the scheme has met its objectives of fostering National Unity in the country, 83 percent also believe that graduates do benefit from the scheme. Some of those benefits include monthly allowance (30 percent), intercultural relationship (17 percent), and self-development (12 percent) amongst other benefits.

Finally, 24 percent of adult Nigerians would like the scheme to be modified in such a way that the corps members get employed immediately after their service year. Therefore, rather than scrapping it, the government and concerned stakeholders should laisse with private companies and organizations to gainfully employ a certain percentage of Youth Corpers after completing their service year. These are some of the key findings from the NYSC poll conducted in the week commencing 12th July 2021.

The opinion poll was conducted in the week commencing, July 12th, 2021. It involved telephone interviews of a proportionate nationwide sample of 1,000 randomly selected phone-owning Nigerians aged 18 years and above, representing the six geopolitical regions and 36 states and the FCT of the country. Interviews were conducted in 5 languages – Igbo, Hausa, Yoruba, Pidgin English, and English. Although we can say with 95% confidence that the results obtained were statistically precise – within a margin of error of plus or minus 4.65%; we recognize that the exclusive use of telephone polling has its limitation of excluding non-phone-owning Nigerians.

Nonetheless, with the country’s teledensity put over 100 percent by the Nigerian Communications Commission (NCC), we consider our telephone polling approach appropriate. Also, given the rigorous scientific process of randomization and stratification applied, we can confidently stand by the validity of our methodology and approach. 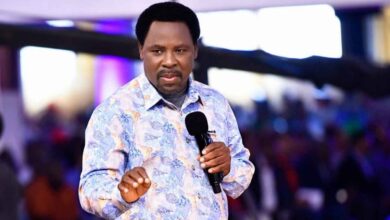