A timber merchant, who was abducted by kidnappers in Ikole Ekiti three days ago has regained freedom after paying a sum of N1.5 million and some items as ransom.

It was reported on Sunday, October 3, that a timber merchant identified as Olu had been abducted by kidnappers in Ikole Ekiti, in Ekiti State.

It was gathered the incident occurred in the early hours of Sunday along Ikole – Ara road in Ikole Local government area of the state.

The timber merchant, who is also a High Chief of Ara Ekiti, Ikole Local Government, was released after paying a sum of N1.5 million as ransom.

Olu, who is also the Chairman of Timber Merchants Association in Ikole Local Government, was freed on Wednesday morning at Aiyebode Ekiti area of Ekiti State.

Meanwhile, on Wednesday morning, kidnappers have abducted at least four people at a farmstead in Ilasa Ekiti, Ekiti East Local Government Area of the state.

It was gathered that the incident occurred in the early hours of Wednesday around 1:30 am.

According to Eyewitnesses revealed that the gunmen stormed Eti- Ero farmstead in Ilasa Ekiti around 1:30 am and ransacked the place.

He said a child (Yoruba pupil to be 10 years old) and three Ebira farmers were kidnapped and taken to an unknown destination.

He said: “The gunmen came around 1.30 am and started shooting sporadically. The gunshots generated a lot of panic and some brave people among them had to rush out of their buildings and fled into the bush.

“As they were shooting, they were searching all the buildings and in the course of doing the searching, they got home of a child confirmed to be less than 10 years and three others who were farmers.

“They have been taken to an unknown destination and no one has been contacted as of now.”

Meanwhile, the Ekiti Police command confirmed the incident to newsmen.

“Even the police have rescued one of the captives from the abductors and one person had been arrested in connection with the midnight raid.

“Our men are searching the bushes for the only person in their custody. We assure the people of Ekiti State that we will get him rescued and the culprits will be arrested to face justice”, Abutu said. 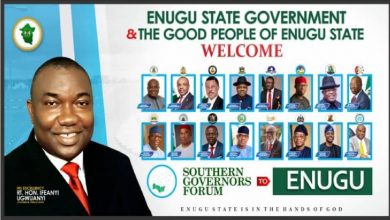