Hafsat Ganduje, the wife of Governor Abdullahi Ganduje of Kano, has been arrested by the EFCC over a bribery and land fraud case reported by her son.

The arrest comes weeks after her failure to honour the anti-graft agency’s invitation.

she was arrested based on a petition Abdulazeez, one of her sons, wrote against her.

In his petition, Abdulazeez, the governor’s son, had said he was approached by a property developer to facilitate the acquisition of some plots of land in Kano with some hundreds of thousands of US dollars as commission.

He said three months later, the property developer discovered that the plots of land he paid for had been allocated to other buyers and he requested for refund.

Abdulazeez said the mother refused to honour the request, straining the relationship between him and the developer.

He was said to have fled abroad after filing the petition which was widely reported in the media.

Mrs Ganduje had earlier been invited to report to the EFCC’s Abuja headquarters on September 13. But she did not appear and the EFCC then threatened to arrest her.

Sources close to her later said she travelled to the UK at the time to attend the graduation ceremony of her son.

Investigators are questioning Mrs Ganduje over allegations relating to land fraud in a petition by her own son, Abdualzeez Ganduje.

A person, who has the knowledge of the arrest but asked not to be identified, said “she was arrested this (Monday) evening.”

Mrs Ganduje was still at EFCC headquarters as of 6a.m. on Monday.

An official of the EFCC said on Tuesday morning that Ganduje’s wife was picked up following her rejection to honour the invitation extended to her.

The senior official noted that she was quizzed immediately after her arrest Monday evening by the crack detective team of the anti-graft agency, adding that she would continue to respond to queries in relation to the subject matter on Tuesday at the commission’s headquarters. 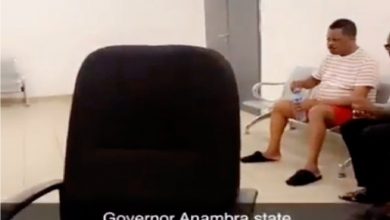