A long year two mad men who have been roaming on the street for over ten years was miraculously healed on Thursday, June 3, in Akure, Ondo State capital at the ongoing 2021 Evangelists, Planters, Prophets, Prophetesses Conference of the Christ Apostolic Church (CAC).

It was reported that two mad men received instant healing and were delivered from insanity when the General Evangelist of Christ Apostolic Church, Worldwide, Prophet Hezekiah O. Oladeji led other ministers for evangelism in Akure, Ondo State.

The ministers who went with Prophet Hezekiah to Akure were among the ministers who are taking part in ongoing 2021 Evangelists, Planters, Prophets, Prophetesses Conference in Ikeji-Akakeji.

As part of activities for the conference, they embarked on evangelism in Akure where God used His servants to deliver these mad men who had been in that situation for years.

God, who is the same yesterday, today and forever, used His servants to pray for the mad men and they received instant healing.

They were brought to Ikeji-Akakeji at the ongoing conference where the congregation saw them and further prayed for them.

The General Evangelist, Prophet Hezekiah ordered that they should be taken to “Odo Ariran” for further spiritual cleansing which was done. They were later taken to a barbing salon where they got haircuts.

Both of them who are now in good condition and are properly taken care of in Ikeji-Akakeji at the ongoing conference. 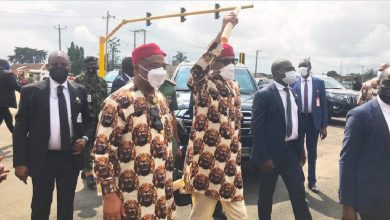 Buhari In Imo: I Want To Be Remembered As President Who Stabilized Nigeria