Residents of Iseyin, Oyo State, are still grieving over the death of some people in the area allegedly felled by the bullets of trigger-happy men of the Nigerian Customs Service on Eid-el-Fitri.

It was reported on Saturday that the dead were killed by men of the service pursuing a Sport Utility Vehicle loaded with suspected smuggled rice. The victims who had waited for the day with high hopes were denied their dreams by the killer officers. Their remains which further drew wailing from the villagers lay lifeless and drenched in their pool of blood on the dusty road.

The killings sparked an outrage and the customs base in the town was attacked by angry youths who were protesting against the mindless act. Some vehicles were torched to show their anger. Some of the residents who spoke with our correspondent justified the youth’s action noting that it wasn’t the first time customs men would shoot indiscriminately inside the town while pursuing smugglers.

The Onisiles in the community were one of the grieving families. Thirty-three-year-old Ibrahim Onisile was one of the slain youths. Onisile’s wife was said to have been delivered of a baby six weeks before he was killed. Other victims included 31-year-old Tobi Opeyemi; Abdullahi Abdulazeez, 32 and 34-year-old commercial tricycle rider, Timothy Gbadegesin.

It was gathered that Gbadegesin, a house painter turned commercial motorcycle rider popularly called okada, went to fix the tyres of his motorcycle when a bullet allegedly fired by the customs hit him and he died on the spot. A Hausa man selling watermelon identified as Umar Abu was also a victim.

The Aseyin of Iseyin, Oba AbdulGaniy Salau, who was miffed at the killings, issued a statement to condemn the act which he said was becoming many in his domain.

The monarch, who is a veterinary doctor, also appealed to the people not to violently react to the incident while also urging rice dealers in the area to always be law-abiding.

The monarch said, “We will no longer allow custom officers to continue wasting the lives of our promising young ones, who are our future and hope and so drastic steps shall be taken to look into the remote and the immediate causes of the killings.

“The Aseyin-in-Council is going to wade into the matter and we shall get to the root of it. I enjoin family members of the victims to repose confidence in the traditional institution because prompt actions are being taken to allow peace to reign permanently in the town.”

The monarch, when contacted by our correspondent to speak further on the killings and efforts of the town to ensure the prosecution of those responsible for the killings, said the community had raised a panel to carry out detailed investigation into the incident.

He said the service refused to abide by its Act which limits pursuing of smugglers to within 40 kilometer radius to a border. According to the monarch, Iseyin is more than 200 kilometers away from the nearest border to it. The monarch said the Sallah-day killings had brought sorrow to the bereaved families, adding that the killing of their breadwinners would worsen their poor living conditions.

The media aide to the Aseyin, Mr Semiu Azeez, told our correspondent that the situation in the bereaved families was terrible because many of those killed were youths who left behind wives, children and aged parents.

He said, “Onisile left a wife with a six-week-old baby. That is a terrible blow to the family. How will they cope with that considering the state of the economy?”

Reacting to the incident through a statement, the NCS claimed that some rice smugglers hired hoodlums to attack its officers on lawful duty and injured some of its officers in the process.

The statement, signed by Theophilus P Duniya on behalf of the Ag. Controller, F O U Zone ‘A, indicated that one of its injured officers was abducted by the hoodlums with his rifle and his colleagues in the process of rescuing him fired at the hoodlums and three of them were killed.

The statement read, “At about 1500 hours of Thursday, May 13, 2021 some daredevil smugglers mobilised themselves with the help of some thugs; attacked a patrol team serving with the Federal Operations Unit Zone A, who were on lawful duty at Iseyin.

“The officers who were on routine patrol intercepted two Nissan Pathfinder SUVs fully loaded with smuggled foreign parboiled rice at Iseyin. Sequel to the interception the officers were attacked by a mob who were mobilised by the smugglers. The mob attacked the officers with dangerous weapons which led to the infliction of serious injuries on two officers.

“They attempted to abduct one of the officers that was brutally attacked; who sustained deep cuts on his head and other parts of his body. The assailants had taken the injured officer with his rifle before his team members who acted in self-defence, shot at his suspected abductors leading to the death of three of them before he was rescued and taken for immediate medical attention.”

However, members of the bereaved families disagreed with NCS claims that those killed were hoodlums hired against customs officers. They noted that their loved ones killed by the men were neither rice dealers nor hoodlums. Many residents corroborated the claims of the grief-stricken families while accusing NCS of “fabricating falsehood to justify their act of wickedness.”

Speaking with our correspondent, Alhaji Rasaki Tijani, who is Gbadegesin’s uncle, told our correspondent in an interview that his nephew was neither a smuggler nor a rice trader. He said the deceased trained as a house painter but due to the country’s poor economic situation resorted to riding a commercial motorcycle.

He said the late Gbadegesin’s father died not long ago and his bereaved mother just completed the prescribed number of days to mourn her late husband before her son was also killed.

Tijani said, “Gbadegesin was my nephew. I am his father’s younger brother. My brother died recently and his wife just completed the required days to mourn her late husband. She was sick immediately after that and her children took her to hospital for treatment. She just came out and three days later, her son was shot dead. It has been difficult to console her. Killing the boy has thrown the family into a deep sorrow.

“He was a Christian and he decided to use okada to make some money in the afternoon on Eid-el-Fitri because he wanted to use the opportunity to make money as many people were in town that day. He went out around 2pm and his bike’s tyre got punctured. He took the motorcycle to where he would repair its tyre. He was there when customs men started shooting and was hit by a stray bullet and died. He was a young man. He had two wives; one had a boy and the other had two boys. Who will train the children now? Nobody can promise to assist because the situation is so bad that everybody is managing to live. We need help for the children. We are praying that God should raise helpers for the kids.’’

The mood in the Onisile compound was gloomy when our correspondent visited.

One of Onisile’s elder brothers, Alhaji Abdulateef Azeez, told our correspondent that the tragic incident had destabilised the entire family because nobody envisaged it.

He said, “The entire family has been mourning since the incident happened. We are praying to God to console everybody. The only child he left behind was less than 40 days old before he was killed. The wife and everybody in the family are in sorrow. It is unfortunate. We call on the government and on anyone who can help. We never thought this could happen. It was shocking but we have to accept our fate. But this type of killing should not be allowed to happen again. We don’t know who will be their next victim.”

The National President, Iseyin Development Union, Alhaji Bayo Raji, who also expressed anger over the killings, said the customs men had almost turned the town to a shooting range. Speaking in an interview with our correspondent, he said the killing of innocent residents by customs had lingered, adding that Iseyin people were ready to ensure that the trigger-happy-officers were punished according to the law.

He said, “Nobody has the right to take another person’s life except the court and the court will not order that innocent persons should be executed without trial. Killing of innocent residents by customs has become regular in Iseyin. We have had five of such cases in the past five years and four of them were by customs officers. Iseyin people are peace loving and I don’t know why they want to kill in our town. They shouldn’t turn Iseyin to a battlefield where they just kill anyhow and most times, they kill innocent people.

“If they are to shoot criminals, they should do that at the outskirts of the town. If they do that in the bush, the tendency to kill innocent people will be low and even shooting should not be the first action. Iseyin is over 250 kilometers away from the border with Benin Republic. We don’t want them in the town, they should be at the border. They are aggressive and kill anyhow believing they are above the law that is why it has continued unchecked.

“The people are peace loving and we are not saying smugglers should continue to undermine the economy, no, that is not what we are saying. Customs are government agents and they should do their job but not in a way that will end up killing innocent people whose interest they should be protecting. We have briefed lawyers and they are working to see that those who carried out the killings are brought to justice. We won’t allow this to go away like others. We want the grieving families to be compensated though no amount of money can buy life. More importantly, we don’t want a future occurrence of this in our town.”

Similarly, one of the youth leaders in Iseyin, Babajide Oniyo, told our correspondent that everything must be done to prevent a recurrence of the dastardly killings.

Oniyo said, “There should be periodic training, retraining and seminars for officers of the NCS on how to go about their duties, without killing, maiming or oppressing other citizens. Officers must be mandated to face their jobs and ensure arrests and interceptions are made only at borders and in the bush.

“Their area of jurisdiction must not be less than 40km away from borders, as enshrined in the Customs Act. In the event where they failed in their duties to make arrests at borders or in the bush, officers must be instructed to apply civil measures when trying an arrest in the middle of town.

“Regular mental checks should be carried out on every officer manning our borders, to ascertain their fitness and qualification for such assignment per time. More scientific modalities should be devised for better surveillance and arrest of the smugglers, instead of the use of firearms as it is practised in saner climes. Human lives should be valued above anything and any officer who violates the laid down guidelines should be punished according to the law.”

The state governor, Seyi Makinde, during his visit to Iseyin promised to give the bereaved families N1m each to enable them cope with economic hardship at the initial stage of their grief. Also, Senator Fatai Buhari representing Oyo North Senatorial District and a member of the House of Representatives representing the constituency Shina Peller, had taken up the fight to ensure justice for the slain constituents. 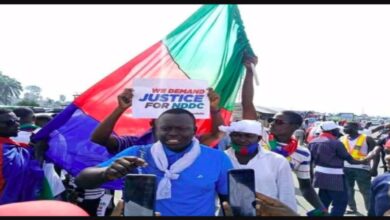