Leader of the Yoruba socio-political group, Afenifere, Chief Ayo Adebanjo, has said he warned Nigerians not to vote for President Muhammadu Buhari in 2015, saying Nigerians were deceived that the President would fight corruption and wipe out Boko Haram in six months.

Adebanjo recalled that he, at the time, accused Buhari of being a feudalist, dictator and a tribalist with no regard for the rule of law.

However, he said Nigerians went ahead to vote for the incumbent because they were bombarded with propaganda, adding that, “Nigerians now know better that Buhari has failed in his promises.”

He said, “Six years ago, I warned the nation of the danger of voting for Buhari. I accused him of being a feudalist by birth, a dictator by training and a religious fanatic, a tribalist who has no respect for the rule of law. But, we were bombarded with the propaganda that he will ruthlessly fight corruption which they said was the bane of Jonathan administration”.

According to the Yoruba leader, the Nigerian economy under Buhari is now in tatters, as corruption grows in arithmetic proportion.

While speaking on Friday at the group’s meeting held at his Ogbo residence in Odogbolu, Ogun State, Adebanjo maintained that “the nation’s security has collapsed”, with the government becoming so helpless that it now negotiates with bandits.

He added that the clamour for Buhari’s resignation or impeachment is growing louder by the day.

The Afenifere chieftain said there may be no election in Nigeria in 2023 if the nation is not restructured and returned back to true federalism.

“There must be a country before elections are held. If Buhari is sincere about keeping the country together, he must restructure the country now,” he said.

Adebanjo stressed that federalism is the only answer to stop the division of Nigeria, telling Buhari that tagging advocates of restructuring as secessionist is mischievous.

He described the 1999 constitution as the cause of instability, alleging that “it was imposed on us by the military dominated by Northern Muslims after the coup of 1966.”

Adebanjo asserted that the Yorubas’ irreducible minimum condition of staying in Nigeria is restructuring, stressing that, “anything short of that is ‘to thy tent, oh Isreal,’ The unity of horse and the rider in which a section of the country is the rider and we the horse is most unacceptable.” 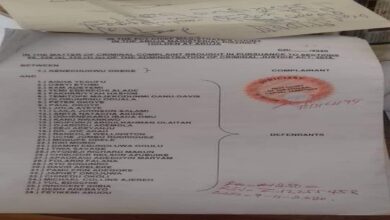 #EndSARS: List Of Celebrities Charged To Court By Kenechukwu Okeke