Governor Abubakar Sani Bello disclosed this when he visited the Internally Displaced Persons (IDP) Camp at the IBB Primary School near the Palace of Emir of Minna.

The primary school was hurriedly turned to IDP camp following the sacking of nearly 5000 villagers from their ancestral homes in Shiroro and Munya Local Government Areas.

Bello said, “I am confirming that there are Boko Haram elements around Kaure in Shiroro local government of Niger state. They have taken over the territory, they have installed their flag.”

He warned that the Boko Haram terrorist are trying to make Kaure their home and headquarters like they did to Sambisa forest, adding that while Sambisa forest is serveral kilometres away from Abuja, Kaure is only two hours drive to Abuja.

He explained that his administration has been engaging the federal government to come to the aid of the state in dealing with the insecurity, adding that such `1efforts have not yielded desired results. 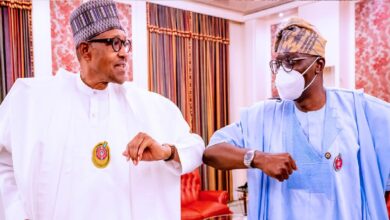