A former member of the National Assembly, Senator Dino Melaye, has thrown a jibe at Kogi State Governor Yahaya Belo, his political arch-rival, saying he cannot be president of Nigeria.

Governor Bello is one of the Nigerian politicians widely reported to be interested in succeeding President Muhammadu Buhari in 2023.

However, the former Kogi West senator took to Twitter on Saturday, April 17, saying Governor Bello who used to be his political ally “can only be the president of Agasa Development Union in Okene.”

“Governor Yahaya Bello cannot climb the ladder of success dressed in the costume of failure. You can only be the president of Agasa Development Union in Okene. Yeye dey smell. SDM.”

In a related development, Governor Bello has been advised to jettison his ambition to become Nigeria’s president in 2023.

A support group within the ruling All Progressives Congress (APC) on Thursday, April 8, asked Governor Bello to support calls for the zoning of the national chairmanship of the party to the northcentral geopolitical zone of the country.

Speaking at the national secretariat of the party in Abuja, the northcentral council of the APC led by its coordinator, Kassim Muhammad, commended Governor Mai Mala Buni-led party’s caretaker committee.

However, Olujuwon Obasanjo, former President Olusegun Obasanjo’s son, has reportedly declared his support for the emergence of Governor Bello as Nigeria’s president in 2023.

He made the appeal when he paid a courtesy visit on Bello in Abuja on Thursday, March 25, according to a statement by the Chief Press Secretary to the governor, Onogwu Mohamed. 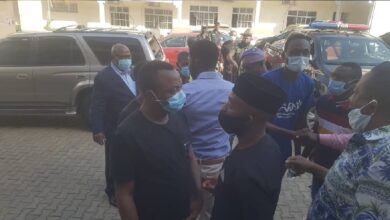