End Of An Era: Bolu Akin-Olugbade’s Rolls Royce Up For Sale – Globalgistng

About two years ago, Prince Bolu Akin-Olugbade, Aare Onakakanfo of Owuland, took delivery of his brand-new Rolls-Royce Cullinan, which at the time was the last of the stable of the British carmaker Rolls-Royce.

The Rolls-Royce collector was the first African to book the high-riding SUV and also the first to receive it. The exclusive but very glamorous ceremony to unveil and present the car to him held at the residence of the Deputy British High Commissioner to Nigeria at Queens Drive, Ikoyi, Lagos.

Before taking delivery of the super-luxury SUV that looks every bit as rich as the select few who can afford it, Prince Akin-Olugbade had other models of the Rolls Royce including the Phantom, Wraith and Ghost amongst others, all with customised number plates “BOLU 1, 2, 3, 4, 5, 6…”

A successful lawyer with a doctorate in Company Law from Cambridge University and an unabashed lover of high-end Rolls Royce cars, Dr Akin-Olugbade is globally reputed as one of the largest collectors of Rolls Royce.

He disclosed in an interview some years back; “I bought my first Rolls Royce in 1984 and now, I am on my ninth Rolls Royce. I believe in dressing well and I travel a lot.” His 10th, the 2019 Rolls Royce SUV called the Cullinan was among the first to roll out of the Factory in December 2018 and was the first to be made for Africa.

In January 2021, the flamboyant man of means died from COVID-19 complications. His death shook the social establishment to its fabrics. Had death requested money, the Ogun State-born Prince would have wilfully doled out millions of dollars. Even though he is a certified billionaire, he doesn’t like to be called one.

As he said in a dated interview, having only $250 million in cash and a few more millions in other currencies should not qualify one for such appellation. But death did not enter into any negotiations with him or his loved ones; it just snatched him from an isolation facility where he was being treated for the global pandemic.

Alas, with his death came the challenge of managing his mouth-watering and expensive fleet. Now, one of his Rolls Royce cars has been moved to an auto shop in Opebi perhaps to be sold. No doubt, the death, at 64years old, of Akin-Olugbade, ended a chapter in Nigeria’s robust high society. But wait a minute, if cars are movable; how about his houses scattered across the world? What happens to them?

The late Prince’s taste in high-end cars was complemented by a higher one which was for owning houses in some of the most exclusive neighbourhoods in the world. In Dubai, he owned a penthouse apartment in Lake View Tower, a 40-storey residential skyscraper located in the Jumeirah Lake Towers. The penthouse comes with amazing views of the central lake, neighbouring Jumeirah Islands, gardens, waterfalls, and promenades. A wonderful waterfront living, the Tower also provides a breathtaking view of the majestic skyline across the Dubai Marina.

Whenever he was in the United States of America, Dr Akin-Olugbade preferred to be ensconced in his plush 5-bedroom house in Westwood, Beverly Hills. A commercial and residential neighbourhood in the northern central portion of the Westside region of Los Angeles, California, Westwood is often called ‘The Creative City’ because of its bustling and brisk atmosphere.

In London, he was always spoilt for choice as he had homes in the very exclusive and affluent St John’s Wood and another 5-bedroom country home in Hampstead. Whichever one he decided on, Dr Akin-Olugbade was certain to enjoy the comfort and convenience of his wealth. Similarly, no expense was spared in building and furnishing his breathtaking Aare Ona Kakanfo Palace in Abeokuta.

Described by awe-struck visitors as Africa’s answer to the Buckingham Palace, the home has eleven gigantic bedrooms, each en suite, the glittering chandelier that effortlessly underscores the nobility and affluence of the owner, and four huge sitting rooms tastefully furnished to Prince Bolu’s high standards.

There is an expansive dining room that can fit a whole community and an amphitheatre whose roof doubles as a helicopter pad. Like the main house, the boys’ quarter is also well furnished. That house, as with many others highlighted, may go the way of his Rolls Royce fleet. 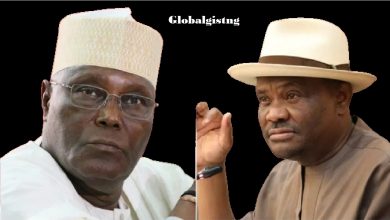 2023 Presidency: Wike Fires Back At Atiku Over VP Choice