In their effort to actualize the agitation for the proclaimed Republic of Oduduwa, a security service was established in Abeokuta, the capital of Ogun State.

With branded vehicles, T-shirts and banners, the agitators marched to the palace of the Alake of Egbaland, Oba Adedotun Aremu Gbadebo.

However, the monarch was said to have travelled out of the State for a presentation at the Senate in Abuja.

Recall that Sunday Igboho’s spokesperson, Olayomi Koiki, had recently threatened that Yoruba youths would invade the palace of the Alake for not supporting Sunday Igboho’s call for a Yoruba nation.

But, Tuesday’s march to the Oba’s palace was a peaceful demonstration devoid of any act of violence. 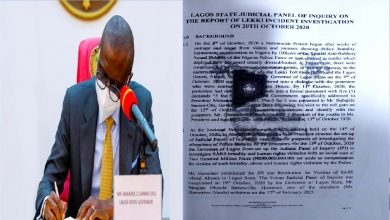