Tension in Kwara, as the state government under the leadership of Governor AbdulRahman AbdulRazaq, on Monday, shut down 10 secondary schools in the state where the use of hijab is disputed.

This was announced on Monday, March 8, in a statement released by the state’s Ministry of Education.

It was recalled that the schools had earlier been shut down by the state government after intervening in the hijab crisis.

After days of mediations, the state government approved the use of hijab in all schools while it directed the shut schools to reopen.

However, the government’s approval of the use of hijab in all schools did not go down well with the Christian leaders in the state.

The statement reads in part:

“The government therefore directs schoolchildren and teachers in the affected schools to remain at home until the contrary is announced.

“The government remains committed to fairness, pluralism, and respect for the law and rights of every citizen at all times.”

The Kwara state government had on Friday, February 19, directed the temporary closure of 10 grant-aided secondary schools in Ilorin, the state capital, pending the resolution of the controversy on the use of hijab.

The affected schools are public schools with Christian backgrounds.

The leaders of the Christian and Muslim communities had refused to shift ground regarding the use of hijab during several meetings held with the government.

The state government in its intervention declared the approval of the use of hijab in all public schools, irrespective of the “religious background”.

The government explained that it made the decision after considering all the submissions, the education law of the state and relevant court judgments.

Governor Abdulrahman Abdulrazaq of Kwara came under fire after approving the hijab approval.

The decision was rejected by the Kwara Baptist Conference which opined that the governor was following the wrong advice.

Kicking against the government’s move, the president of the conference, Reverend Victor Dada, claimed that the governor even acted in contempt of the court because the case is still pending.

“A school has its own administration and rules that guide it. If a particular school says no to Hijab, leave them and go to where that accepts wearing of the hijab.

The government should stay neutral on this issue, I don’t know why this country is Like this.”

“This is highest peak of religious intolerance. For goodness sake, why should wearing hijab be a topic from first place? The state government should transfer teachers that are resisting its simple instruction.”

“How did we arrive at this point, religion always ha ba yet we are not progressing as a country because our religion does not reflect in our attitude, we still loot, steal and ….. Yet we claim to be holier than anything.”

10 easy steps to check election results on the INEC portal 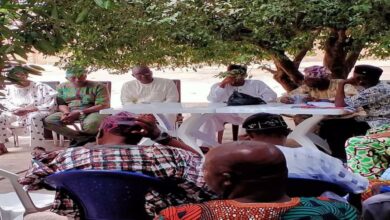