As some 28 people have already been killed in retaliatory attacks by herders on some Ogun villages, many residents of the affected communities have sought refuge in the neighbouring Republic of Benin.

No fewer than 28 lives have been lost in various communities in Yewa North Local Government Area, Ogun State in the last one week or thereabout as a result of deadly attacks believed to have been carried out by herdsmen. The attacks and the resultant deaths were in spite of repeated assurances of protection by the state government and security agencies.

Hostilities between herdsmen and residents of about 29 agrarian communities in the aforementioned part of Ogun State dates back to as far as 15 years. The affected villages had been attacked in recent times by terror herdsmen who were said to have camped at Eggua, a neighbouring town from where they moved with their hordes of cattle, ravaging farmlands within the Ketu-Yewa communities, which share borders with the Republic of Benin.

The armed herdsmen, who usually lead their flock in search of pastures because of the rich vegetation in the Ketu-speaking villages, have also been fingered in the destruction of cash crops belonging to the native farmers as well as killings and raping of women who are mostly natives of the communities.

The face-off peaked late last year when the residents prevented the herders from grazing and banished them from the communities.

The Nation had exclusively reported how some soldiers attached to 35 Artillery Brigade, Alamala, Abeokuta, later escorted the herders to the villages and openly flogged residents for rejecting them.

In a bid to discountenance the report, the soldiers again visited the communities a week after the story was published asking the victims to recant, but the brutalised residents refused.

Chronicle of attacks
Investigation conducted by our correspondent revealed that in the last couple of days, some of the villages mentioned in the report have been raided and destroyed by the herdsmen.

The well-coordinated attacks started with the killing of a farmer, Dele Owoniyi by suspected herders on February 7 at Oha village in Imeko area around 1 am. Several buildings and farmlands were destroyed by the hoodlums.

It was said that the herders, who were armed with guns and machetes, immediately left for Iwoye-Ketu after carrying out the attack. Four days later, two persons were allegedly killed on Thursday, February 11 by herdsmen who stormed Owode-Ketu village.

The victims – Isiaka Apesin and Adebayo Oguntosin, among other travelers, were said to have been ambushed by the herders along Owode Ketu-Ijoun axis, who bolted into a nearby forest after killing the villagers.

The attack, according to sources, was carried out by the herders around 5 am. It was learnt that the bodies of the victims were evacuated from the scene of the attack by men of Eggua Police Division.

The next day, Friday February 12, Imotto Orile witnessed the rage of the pastoralists who shot one resident dead and hacked another one to death. Same day, in the dead of the night, the herders took their bloody attack on innocent residents to Orile-Igbooro, where they killed six villagers and set houses and vehicles ablaze, while about 15 villagers, including children, sustained varying degrees of gunshot wounds.

Three farmers were said to have been killed on Sunday, February 14 when herdsmen stormed Agbon-Ojodu village shortly after the state’s Commissioner of Police, Mr. Edward Ajogun, visited the area.

The police commissioner, who visited some places in the troubled areas, including the palace of the Olu of Ilaro and paramount ruler of Yewaland, Oba Kehinde Olugbenle, had promised adequate security of lives and property. But a few minutes after commissioner and his team left the area, the suspected herdsmen struck and killed three farmers.

Also in the dead of the night on Sunday, February 14, the herders struck at Ibeku and Asa villages (the same communities where soldiers escorted herders to brutalise residents for rejecting herdsmen on December 19 last year, killing six persons, including one Kehinde Gbadamosi whose body was set ablaze.

According to sources, the hoodlums had dragged Gbadamosi, an indigene of Oyo State, out of his house and killed him before they threw his body back into the house and razed the building.

On Monday, February 15, they moved to Ijaka-Oke and Ijaka-Isale in broad daylight and started shooting at anything in sight. By the time the smoke from their guns receded, eight villagers had been dispatched into early graves while more than 16 commercial motorcycles were set ablaze.

By the evening of the same day, they moved to Oke-Akanni and Oke-Imala villages in Ayetoro where an unspecified number of residents were killed and buildings set ablaze.

The attacks occurred few minutes after Governor Dapo Abiodun visited Oja Odan and other communities in the area with members of his cabinet and heads of security agencies for on-the spot-assessment and assured the villagers of their safety with the deployment of a special police squad to tackle the herders.

The governor said: “The delegation I sent told me what they saw. They said a lot of things happened, and as they were giving the report of what they saw, we heard that another attack happened.

“I called a security meeting this morning. And before yesterday, I had set up a task force and bought new vehicles and motorcycles for Yewaland security. The task force consists of police, soldiers, civil defence corps and hunters to help us in terms of security in your area.

“Tomorrow, by God’s grace, all the new vehicles and motorcycles will be released. The task force will be stationed here; they will not only patrol your areas and go back to Abeokuta,” he assured the people.

Abiodun also promised to foot the hospital bills of those who were injured by herdsmen, pledging to help those who lost their property during the attack by cushioning the effect of the loss.

In the early hours of Wednesday, February 17, the herders once again struck at Ilogun Orile village where they were said to have killed unspecified number of residents.

Prompted by the spate of attacks, many villagers from the affected areas have deserted their homes. Some of the affected villages include Agbon-Ojodu, Moro, Asa, and Ibeku.

When The Nation visited the area during the week, residents were seen moving out in droves for fear of another round of attack. At Asa, the ruins of the bloody attack stared one in the face as a few of the residents who came out of hiding on sighting our correspondent lamented their woes.

Some bullet cartridges allegedly belonging to the herders littered the ground.

A man was sighted moving his family on his motorbike out of the village. The man, who asked not to be named, said he was moving his family into safety at an undisclosed community in neighbouring Republic of Benin.

He said: “I only escaped death by a whisker. But for Providence, I would have been dead by now. I don’t want to push my luck too far, so I have decided to relocate my wife and children to a village in the Republic of Benin where herdsmen are not allowed to do open grazing.

”Even if I stay back here, there is nothing to live on again. My farmland has been destroyed by these marauding herders. I am happy that I am leaving with my life intact.”

A villager said the herders embarked on a shooting spree as soon as they stormed the community in a commando-like fashion, killing people and destroying properties worth millions of naira.

He said: “After killing our people, they broke into residential buildings, stole their belongings and looted shops. They raided a phone shop, carted away several expensive phones and set the shop ablaze. A lot of our people have left for villages in Benin Republic for fear of being subjected to another attack by the mindless herdsmen.

”They brought out Gbadamosi aka Big Daddy from his house and killed him before setting his body ablaze. As you can see, his huge body has become charred from the fire.”

Monarchs, lawmakers, residents lament
Lamenting the development, the Olu of Ilaro and Paramount ruler of Yewaland, Oba Kehinde Olugbenle, raised the alarm on February 13 that armed herdsmen were plotting to attack key communities in Yewa area.

Oba Olugbenle said the plan of the armed herders was to hold the targeted villages down in terror as they had done in remote villages in the last one week. 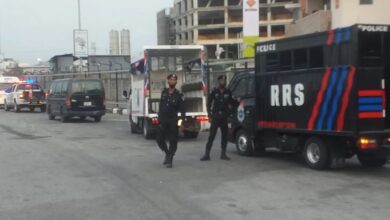