Alhaji Atiku Abubakar, former Vice President and 2019 Presidential candidate of the Peoples Democratic Party (PDP), on Monday, February 1, has raised his voice to the Federal Govt, saying the country has been badly managed, damaged and broken, adding that there is need for urgent rescue.

Atiku specifically lamented over what he described as hunger in the Northern Nigeria and indeed the entire country which he said is getting to an unbearable and alarming rate, saying farmers, fathers and mothers can no longer go to the farm.

Speaking at the weekend in Gombe State during the inauguration of states and zonal leadership for a major youth group in the North-east zone known as Nigeria Youth Congress for Atiku, the former Vice President, who was represented by Hon. Oladimeji Fabiyi, also lamented the state of insecurity in the country.

He said: “The hunger in Northern Nigeria and indeed the entire country is getting to an unbearable and alarming rate as our farmers, fathers and mothers can no longer go to the farm.

“Agriculture is one of the comparative advantages Northern Nigeria has over other regions in the country but as at today, it is almost non-existent, unfortunately, occasioned by abysmal insecurity in the region.

“You hardly can drive 10 kilometres in any part of the North without being kidnapped or attacked by armed bandits.

While thanking the leadership and members of the group who came from the six states of the North-east for the inauguration and their support, Atiku urged the Northern youths to protect their future.

“Northern youth have great potentials, you have a huge role to play in what becomes of your region and Nigeria moving forward, you must protect your future and you can achieve this only by supporting one of your own, who has shown a commitment to your welfare, progress and development.

“Atiku Abubakar, the Golden son of the North East and a Pan Nigeria per excellence surely stand in the gap.”

Fabiyi added that; “personally, I wished Atiku is from Southern Nigeria, we would give him all the necessary support to lead Nigeria, but it’s not too late for the North-east and indeed entire Northern Nigeria to rise up in support of their own.”

The National Chairman of the group, Yahuza Shehu, in his welcome address, highlighted the numerous achievements of the group since formation, stressing that Atiku remains the best unifier for a terribly divided country like Nigeria.

He said: “The North-east has no reason not to support Atiku should he decided to run come 2023.”

He called on all stakeholders, not only in the North-east but across Northern Nigeria to support Atiku when the time comes. 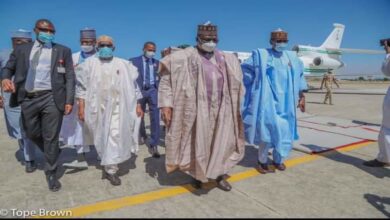