At least 15 million young people have backed Kogi State Governor Yahaya Bello as the most likely presidential candidate for 2023, a youth movement sponsored by GYB2PYB said on Thursday.

The group divulged the information in a communique by its Director-General, Amb Nihi Oladele, during the second virtual meeting held at the Federal Capital Territory, Abuja.

Recall the group had earlier presented list of the 31 state coordinators, which was adopted during its first virtual meeting in December 2020.

While inaugurating the state coordinators as well as commissioning GYB2PYB’s Head Office, the DG urged Nigerians, especially the youths to give Governor Bello the needed support in 2023.

According to him, “We have searched all over the length and breadth of our country and found out that Governor Yahaya Bello, who is a young man and who has given the women and young people the platform to be the drivers in their own affairs, will perform well if elected into office.

“Nigeria as presently constituted, needs a young dynamic, forward-looking, and experienced leader, which is why we are joining hands with Governor Yahaya Bello to liberate our country from the challenges confronting us.

“The governor has what it takes to provide purposeful leadership and good governance, if elected as President in the 2023 general elections.

“He will offer the right leadership, as he is interested in the good of Nigeria. The GYB2PYB Youth Movement is not a selfish agenda, but an effort to project, market, and sell him (Yahaya Bello) to other Nigerians.

“Over 15 million Nigerian young men and women have signed a request letter that will be handed over through some selected youths and women across the 36 states of the federation and the FCT to Governor Yahaya Bello to call on him to accept to contest the position of the President.”

In his closing remarks, the youth leader commended Governor Bello for his security architecture in Kogi, calling out on the governor to take the responsibility of leading Nigerians come 2023.

“We believe Governor Yahaya Bello to be a detribalised Nigerian. He will stamp out nepotism from our country, and he will handle the intractable security problems of our country.

“As a young man, Governor Bello will engage the women and the young men in governance and make them critical stakeholders in the affairs of the country. We believe that he is a good brand that we can sell.

“We urge all of you to take the message nationwide, that Governor Yahaya Bello will handle security. He will ensure women and youth inclusiveness in governance.

“He will erase all forms of ethnic and religious bias and also ensure massive Foreign Direct Investments into the country.

“Right now, we need a leader that can hold our country together. We are saying that the person is Governor Yahaya Bello.

“I believe that the challenge is to have a good leader to succeed President Muhammadu Buhari, who has tried his best. We should begin to identify somebody to take over from him and do a fantastic job.

“We will make it impossible for Governor Bello to say no, because he holds it to Nigerians to participate in the election. It is a patriotic duty we are calling on him for.

“He is a man who believes in the progress and development of Nigeria; he has no choice than to accede to our request. He should come out and offer himself for the leadership of this country at this time.

“We are calling on him to serve. We are confident that he will come out and run for the presidency.” 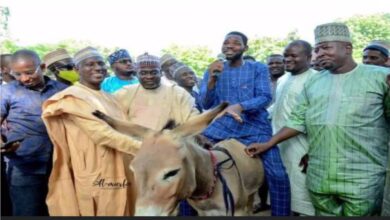