Following the abduction of hundreds of boarding school students in Dankara, Katsina State, BBC Hausa spoke to a schoolgirl who survived the abduction on Friday.

The student, who was asked by the BBC for his parents’ consent before the interview, said that on Friday night after returning from school around 9:30, they heard gunshots fired in the air, and later noticed that even the attackers entered the school.

He said:”Everyone came out and we ran up the wall. After we climbed the wall they used to light our lights and tell us to come back.”

According to the student, it was then that they turned around and returned, thinking that the men were security officers, but later realized that they were not.

How many of you have been kidnapped?
“After we were taken into the forest, one of them ordered us to stop and count our belongings before continuing our journey,” said the young man, whose name was withheld.

He said that when they were counted, it was found that they were 520 in number.

“We kept walking in the bush, we were being pushed and beaten, we spent the night walking, 30 minutes before dawn we were told to go to bed and rest,” he said.

How did you survive?
The student told BBC Hausa: “After they sat us down I leaned back a little. I found the side of a tree and I turned my back on them. I lay down and straightened my legs.”

“After everyone left, I came crawling and looking until I entered the city,” he said.

He said even if God helps a person to escape from the hands of the people you do not know where to go because only the forest can be seen, so only God saved him from their hands, as he said.

The student made the remarks as authorities said local security forces were hunting down the gunmen in an effort to rescue the other abducted students.

Garba Shehu, a spokesman for the Nigerian president, told the BBC that several children had fled, saying only 10 children had escaped.

“Some of the children who fled the bush said that 10 children were being held hostage by the gunmen,” he said.

However, President Buhari has been criticized by locals who say he should have gone to Kankara himself to see what happened instead of sending government officials since he was in Katsina State. 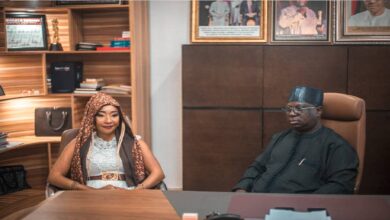