The minister of information and culture, Lai Mohammed has said President Muhammadu Buhari will complete his tenure despite the calls for his resignation.

Speaking at a meeting with the Newspaper Proprietors Association of Nigerian (NPAN) in Lagos on Thursday, December 3, Mohammed said the calls for the president’s resignation were political.

According to The Cable, he described it as cheap and irresponsible to ask a president to resign before he completes his tenure over the killings of some farmers in Borno state. Mohammed said:

“In the wake of the killing, there have been calls in some quarters for Mr. President to resign. “Well, let me say here that this call amounts to playing dirty politics with the issue of security, and it is cheap and irresponsible.

He insisted that no amount of clamour for resignation will stop the president from serving his term.

The minister said it amounts to needless distraction and cheap politicking to demand for the president to step down anytime there is a setback in the war on terror.

Hakeem Baba-Ahmed, the Director of Publicity and Advocacy of NEF made the appeal in a statement on Wednesday, December 2, in Abuja.

The forum faulted the federal government over the claim that the military had reclaimed territories from the terrorists. 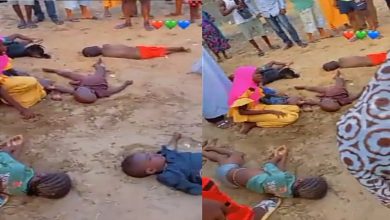