Service Producer of the Voice of America (VOA) Grace Alheri Abdu, has said she was lucky to be alive after soldiers held her in Oyigbo, Oyigbo Local Government Area (LGA), Rivers state, for five hours as she paid a media investigative visit to the volatile area.

Andu was arrested and detained by the soldiers at about 2pm Saturday till about 7pm when she regained freedom after several alleged interventions by key stakeholders.

The VOA personality who said the soldiers who held her were “all drunk and intoxicated”, narrated that, “They told me to thank my God that I was a female journalist, and not from any of the media houses based in Port Harcourt otherwise they would have wasted me and that nothing would happen.”

The soldiers had allegedly accused her of running live broadcast of her assignment in Oyigbo, as well as transmitting military operations in the volatile area live without permission.

She denied the allegations, claiming that as soon arriving Oyigbo, dropped off by a relation, also a journalist, she walked down to a group of soldiers by the Oyigbo Expressway, and introduced herself.

She further claimed she sought their permission to snap photo shots of the burnt Oyigbo Police Station with one of the soldiers responding that since it was a police station, it was only the police that could grant her request or otherwise.

The soldiers were said to have been infuriated when, in defiance of their caution, the VOA reporter had moved to the area of the burnt police station, and with no single policeman on sight, clicked her camera on the scene.

Interventions that led to her release include a statements from the United States Embassy in Nigeria directed at the Nigerian military hierarchy, those from the West African Journalists’ Association, WAJA, foreign and local rights groups.

Spokesman of the 6 Division, Nigerian Army, Maj Charles Ekeocha could not be reached for reaction to the development at the time of filing this report.

Rights activist, Enefaa Georgewill, one of the persons who hyped Abdu’s arrest said his Rivers Civil Society Organisations would not bow to “dictatorship”.

Like Loading...
Tags
Grace Alheri Abdu Grace Audi I Am Lucky To Be Alive — VOA Reporter Arrested By Army In Oyigbo Obasanjo Is A Disgrace To Nigeria – Nabena

2023 Presidency: God has plans for you – Nigerian Prophet tells Tinubu what to do 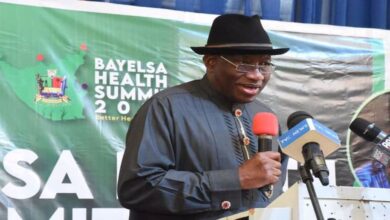