Nigerians on Social media have taken a swipe at President of the African Development Bank (AfDB) , Akinwunmi Adesina after he backed former Nigeria Head of State, Yakubu Gowon in refuting claims that he looted half of Central Bank of Nigeria to the UK.

Recall that a member of the UK Parliament, Tom Tugendhat, made the claims during a debate on the Lekki toll gate shootings of protesters.

Following the development, Gowon in an interview with the BBC, described the allegation as “rubbish”, adding that he served Nigeria diligently with records to show.

Also, reacting, Adesina took to his official Twitter page describing the claims by the Member of UK Parliament as misinformation.

However, Nigerians who weren’t pleased with the praises showered on the former Head of State took to social media to drag Adesina.

While some were of the opinion that the spirit of Lai Mohammed has landed on him, others dragged him for being dishonest and a hypocrite, adding that Gowon isn’t only a criminal but also the one who renegaded on Aburi Accord, killed 3 million Igbos, and starved children to death.

Here are some reactions gathered by Globalgistng.

@Nefirriti, “Akin Adesina is now Yakubu Gowon’s mouthpiece. These old people will never learn. There is no misinformation here. Gowon is many things but honest. He is the war criminal who renegaded on Aburi Accord, killed 3m Igbos, starved children to death. Gowon & his ilk will burn in HELL.”

@ Iheatu,” you were very quiet during #EndSARS but suddenly you care about the reputation of an old man who couldn’t honor the Aburi Accord and killed over 3 million of my people during the war. fuck you.”

@TopeAkinyode,” AfDP President Adesina could support General Gowon all he wants but saying a coupist & someone who reneged on the Aburi accord, leading to the civil war & the death of about 3 million people is decent, honest, humble & a man of integrity is nothing but outright falsehood.“

@Ayemojubar,” Adesina is 60, while Gowon is 84 and he said he knew him. Same Adesina that was 6 years old playing around with pant during Biafra war. It’s obvious that the spirit of Lai has landed on Adesina.”

@ObiNwosu,” Dear flamboyant Akin Adesina, most of the 2-3 million Igbo children who died during that war would have been your age mates today. It is easy for you to say this about Gowon today. You lived but they did not.”

@Firstdearl,” The monster responsible for this is Akinwumi Adesina’s poster boy for decency, honesty, amazing simplicity, humility and integrity. Tells you all you need to know about Mr Adesina. Pass it on.“

@Yususf,” So fast to defend the indefensible but never made any positive comment while government was massaging the youths who believed so much in you. Politicians and top bureaucrats, okpa wa kin.“

Like Loading...
Tags
Democrats demanded that trump explain the supply of ventilators to Russia Lai Mohammed Lai Mohammed: Petrol Price In Nigeria Is One Of The Cheapest In Africa Lai Mohammed: The most dangerous minister in Buhari’s cabinet Spirit of Lai has landed on you- Nigerians drag Adesina over comment on Gowon 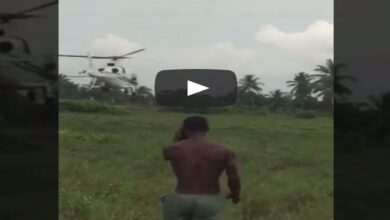