The National Broadcasting Station (NBC) has sanctioned three major broadcast stations over their alleged roles in escalation of violence across the nation, also Vice president Yemi Osinbajo has summoned an emergency meeting of the National Economic Council (NEC) for Monday, October 26, 2020.

The stations were accused of airing unverified images of the alleged shooting.

The protest, which began on a peaceful note has since gone violence, with many states experience wanton destructions and looting of public and private properties.

Constitutionally, the Vice president is the chair of the NEC, which has as members state governors.

Osinbajo promises justice for #EndSARS protest victims
#ENDSARS: How Nigerians reacted to Osinbajo’s statement
The meeting is to, among others, enable the Council to receive briefings from the state governors and security agencies on the state of the states and the nation.

The virtual emergency EC meeting, scheduled for 12noon, is convened amid looting of COVID-19 palliatives at warehouses as well as the vandalisation of public and private property across the country after the#EndSARS protests that had claimed lives. 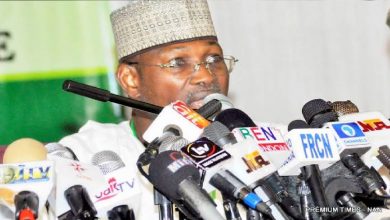