The governor made the announcement after hoodlums besieged the premises of Kwara Ministry of Agriculture and looted relief materials being distributed to victims of a recent rainstorm in Ilorin metropolis.

The hoodlums, including females and teenagers, carried various dangerous weapons and chanted solidarity songs while looting the items.

According to the governor, the hoodlums’ actions cannot be defended under any guise, calling it a pure act of criminality by some persons hiding under the nationwide tension to commit crimes.

He stated, “I have just had an emergency security meeting with commanders of various security agencies in the state. This is to assess the situation in the state.

“Over the last few days, I had earlier met with the traditional rulers, opinion leaders, members of the student community, and many other stakeholders in the state.

“Our observation is that what has happened so far today was not a protest. It cannot be defended under any guise. It was a pure act of criminality. Some persons are hiding under the nationwide tension to commit crimes.

“The government has a duty to protect law abiding citizens and their properties. Lives are being threatened. Businesses are being looted.Public properties have been targeted. This is unacceptable. It is not who we are.

Unconfirmed reports have it that some people were feared dead on Friday evening after Nigerian security forces opened fire on looters at a warehouse holding relief materials for the coronavirus pandemic in Ilorin, the Kwara state capital.

The incident has sent Ilorin into tension.

Witnesses said soldiers and police officers were amongst the security agents who opened live rounds on the warehouse after being called in by state authorities.

The police public relations officer in the state, ASP Ajayi Okasanmi did not respond to all calls put across to him.

It came as COVID-19 warehouses are being uncovered in Lagos and other parts of the country, prompting citizens to besiege and loot them.

Thousands of people in Ilorin in the early hours of Friday, mainly youths, stormed a warehouse where the Covid-19 palliatives were kept by the State government.

The warehouse, located inside the Ilorin International Airport, was bombarded by the people who got to know that the government was sharing some food items around Agric area of the city.

Having received information that the items being shared were transported from the main warehouse, our source hinted that a large crowd proceeded to the airport and forced their way through, overpowering the security on guard.

Meanwhile, the Kwara State government has condemned the attack on the warehouse, stating that such attitude “does not reflect the good nature of the people of the State”.

In a statement by the Commissioner for Communications, Harriet Afolabi-Oshatimehin, the government said the larger part of the palliatives were already distributed and that the looted leftovers were meant for only 1 local government and the most vulnerable amongst amongst the citizens.

The remaining palliatives in the terminal, which the hoodlums preyed on until chased away by security agencies, were meant for special vulnerable groups and just one local government where names of the beneficiaries have just been delivered and officials have started distributing when the street urchins breached the wall of the facility,” she said.

“It would be recalled that the CACOVID and the state government had since September 23rd flagged off the distribution of the palliatives. But it was meant for specific households, as dictated by CACOVID, and so names had to be properly generated to allow for transparent and orderly distribution.

“The actions of the hoodlums are condemnable and those already arrested would face the full weight of the law. The government would not tolerate anyone hiding under any guise to disrupt the peaceful atmosphere in the state. The government commends the security agencies for acting with restraint in the face of provocation by the hoodlums.” 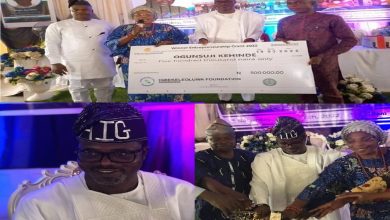