The Special Adviser to the President on Media and Publicity, Femi Adesina, has blamed churches and mosques as well as some sections of the media for promoting messages of hate.

He added that the #EndSARS movement was a vehicle of hate messages.

The President’s spokesman said this in an article titled, ‘If Nigeria Dies, Hatred Killed Her’.

Adesina wrote, “The EndSARS campaign began as an agitation against police brutality, in which there was unanimity of purpose. And suddenly, it became a vehicle of hate. Against leadership, against national cohesion, an opportunity to settle political scores, and equally prepare for power grab in 2023. Hatred came into the mix.”

Several influential clerics including the General Overseer of the Redeemed Christian Church of God, Pastor Enoch Adeboye, had openly expressed support for the #EndSARS protests even as the RCCG posted a video and stories of some of its youths that were victims of police harassment.

However, Adesina said many churches and mosques used the campaign to spread messages of hate and division.

The President’s spokesman added, “When things boil over in graphic demonstration of hatred, it is a culmination of negative sentiments and tendencies. They come in persistent negative postings on social media, which generate and stimulate hate.

“From hateful messages from the pulpit, as if that was the message of love Jesus Christ handed over to his followers. From unduly critical messages during jumat services. From radio and television programs, in which bile is spewed. From talk shows which become a harangue of government, newspaper articles and columns tailored to instigate and generate dissent, and the like.

“Eventually, all cumulate in hatred, which finds expression in genuine causes like the EndSARS campaign. When things boil over, they leave sorrow, tears and blood in their wake, as we have seen. And who suffers? The whole country. Who bleeds? Nigeria.”

Adesina said the agitation by youths against injustice and oppression suddenly took on a variegated nature.

He added that separatists came under the umbrella and began to advance their cause, working for the dismemberment of the country.

“Those beaten black and blue in the 2015 and 2019 elections also crept in, and asked for their pound of flesh, while also plotting for a return to power in 2023,” the President’s aide said.

Adesina expressed shock over the sudden turn of events which led to killings and the destruction of public property.

Taking another swipe at religious institutions, he wrote, “Hatred is evinced from many quarters for Nigeria, and for its government and people at any given time. It comes from churches, mosques, professional activists and agitators, interest groups, some elements in the media, so-called analysts who never see anything good, and so on and so forth.”

Adesina claimed that the President, Major General Muhammadu Buhari (retd), had discussed with him how he was impressed with the then Inspector-General of Police, Solomon Arase, and the reforms he was implementing in the institution.

He, however, did not say why Buhari failed to extend the tenure of Arase despite his achievements.

The President’s spokesman added, “The President told me how much he had been impressed with Arase, and how he regretted that the man spent just about a year with him. He then told me of the police of his dreams, and how he wished he got someone who would translate the dream into reality.

“So, when the President said in a speech to the protesters last week that comprehensive police reform was coming, I knew what he had in mind. If only we would be patient and let him implement the five-point demand of the protesters, which he had accepted. But alas, the protest took another hue and nature, different from the original concept and focus. Hatred crept in, nurtured by all sorts of tendencies.”

2023: Tinubu Not Stopping Any Youth From Contesting For Presidency – SWAGA 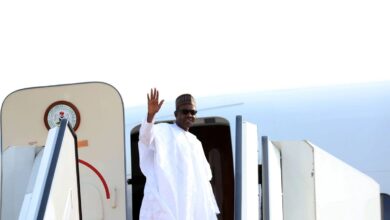