The Ekiti State governor, Kayode Fayemi, on Friday, October 16, has signed the bill to upgrade College of Education Ikere-Ekiti to the University of Education, Science and Technology into law.

The governor signed the bill into law at the EXCO Chambers, Governor’s Office, Ado Ekiti, the state capital to mark his two years in office.

Globalgistng had earlier reported that the Ekiti State House of Assembly, on Tuesday, September 29, had passed to upgrade College of Education, Ikere Ekiti to University of Education, Science and Technology into law.

Members of the assembly hold the sitting to pass the bill on Tuesday, September 29.

The draft bill was transmitted by Governor Kayode Fayemi to the House of Assembly and had subsequently passed the first and second readings during an extensive deliberation on the floor of the House.

Recall that the Ekiti State governor, Kayode Fayemi, planning to upgrade College Of Education, Ikere Ekiti to the Ekiti University of Education, Science and Technology as the bill passed into the law in the State House of Assembly.

On Friday, September 25, various stakeholders have thrown their weights behind the upgrade the College Of Education to the Ekiti University of Education, Science and Technology in order to facilitate technical development in the state and the country.

The stakeholders on Friday, September 25, said that the importance of education to the development of any nation cannot be overemphasized during the Public Hearing on a Bill to upgrade College of Education to the University of Education, Science and Technology in Ikere-Ekiti, Ikere Local Government Area.

The News Agency of Nigeria (NAN) reports that the public hearing organised by the Ekiti House of Assembly’s Committee on Education held at the Assembly’s complex, Ado-Ekiti.

In her address of welcome, Mrs Kemi Balogun, the Chairman of the House Committee on Education, Science and Technology, said the proposed university would provide quality training to enrich and improve the state, national and international human resources when it begins to function.

Balogun added that the Assembly is committed to the slogan,” Education for All” as emphasised in the 4-cardinal points of the Gov. Kayode Fayemi-ked administration.

She said that the public hearing was organised to allow stakeholders make inputs before the eventual passage of the bill.

Also, the State Commissioner for Education, Science and Technology, Dr Adebimpe Aderiye, said that the current College of Education has all the necessary requirements for it to be upgraded to a degree- awarding university.

Similarly, the Chairman of the Governing Council of the College of Education, Chief Afolabi Ojuawo, and the Provost, Prof. Olufemi Adeoluwa, thanked Gov. Fayemi for the initiative.

They said that they were ready to produce graduates that would be self-reliant; who would not be job-seekers anymore, but be employers of labour.

Also Read: Gbajabiamila: Nigeria struggling to survive, we can no longer pretend

They added that the enrollment for the National Certificate of Education (NCE) programne is currently dwindling, so there is the need to upgrade the college a degree-awarding university to meet the current economic reality.

In his own goodwill message, the Ikere community representative, Prof. Olufemi Babatola, said that the opportunity the establishment of the university would bring to admission seekers would also increase the economic base of the state, the nation and the world.

NAN reports that there was a goodwill message from the Ekiti Traditional Rulers Council by its Chairman, Oba Ajibade Alabi, Alawe of Awe Ekiti, who was represented by the Onisan, Oba Gabriel Adejuwon.

Other dignitaries present at the event include : the Ogoga of Ikere, Oba Adejimi Adu, Mr Oke Alabi, the Administrator-General of the state Ministry of Justice and among others. 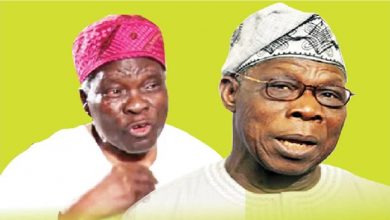 We Have Paid All N-power Beneficiaries – FG