Ondo state Governor-Elect, Rotimi Akeredolu has expressed shock that he lost the Saturday governorship election in three local government council areas in the central senatorial districts despite his developmental works in the councils.

Akeredolu said this during an interview on Channels Television monitored in Akure, the Ondo state capital.

The governor-elect lost Akure South, Akure North and lfedore council areas to the candidate of the Peoples Democratic Party, Eyitayo Jegede in the governorship election held on Saturday across the 18 council areas of the state.

These three council areas in the state are considered the stronghold of Jegede.

The candidate of the third force, Zenith Labour Party who didn’t win any council polled 69,127 votes

While reacting to a question on winning 15 of the 18 councils in the election, the Governor-Elect said ” When it comes to the issue of winning 15 local governments, it’s just a slight improvement of what I did the last time.

“The last time I won 14. Talking seriously, I thought I was going to win the 18 local governments.

“I’m shocked at what happened in Akure because I take Akure South, Akure North and Ifedore as one Akure. So, I’m shocked at the development there.

“But I’ll put that behind me. I’ll move forward. I thought I would win in Akure because I worked in those three local governments where people turned against us. But it’s alright with me. We’ll forget it.”

“The event that commenced this process, like the deputy governor who decided to jump ship. I was shocked too. Although, I got to know it’s going to happen when I saw his movements. I said okay, this man has made up his mind to go.

“I think God answered my prayer, I was praying for him to go and I think he has to go anyway because you cannot have people who will be there and want to stab you at the back and you want to keep them in the house, no.

“You cannot have a snake under your roof and think you can sleep well. So, it was good we asked the snake to go, so we had to sleep properly.

“So, that’s taught me a lesson in politics. But it’s not a new thing. It has happened over and over, right here in South West, even in the North, everywhere.

“Look at the case of Baba Awolowo and Akintola, look at Omoboriowo and Ajasin here. So many instances.

” For me, it’s not something new. When he had to leave, I was very happy and I knew it was politics and I was going face a lot of what I’ll call blackmail because that is their stock in trade because there is no other thing they’re going to throw at us, throw at me, at my wife and children.

“But what I’ll say is that matters like this do repeat itself but it cannot come from the deputy that I’ve chosen now.

Akeredolu said ” I have a lot of confidence in him. I don’t see him behaving like the former one.

Like Loading...
Tags
Agboola Ajayi Eyitayo Jegede I was shocked that Akure people turned against me my deputy was a snake ― Akeredolu ROTIMI AKEREDOLU 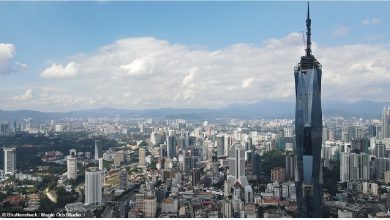 COVID-19: We spent N2.3tn as stimulus package for Nigerians – FG