The Ekiti State chapter of the All Progressives Congress (APC), has suspended Senator Babafemi Ojudu, special adviser on political matters to President Buhari, from the party, Globalgistng reports.

Their suspension notice was contained in a statement made available to Globalgistng, on Thursday, in Ado-Ekiti, signed by the State Publicity Secretary of APC, Ade Ajayi.

Also Read: “Why I was moved to tears on the day of the election,” Oshiomhole finally speaks

According to him, “The suspension is based on the recommendation of the investigative/disciplinary committee inaugurated by the SEC to investigate the disobedience of certain party members to the National Executive Committee (NEC) of 25th of June 2020, which directed members of the party not to institute any court action and to withdraw existing cases in court.”

Globalgistng reported that some of the APC chieftains suspended from the Ekiti state chapter of the party are critical of the Governor Kayode Fayemi-led Ekiti state government.

They had recently accused the governor of working against the APC in Edo by supporting Governor Godwin Obaseki of the Peoples Democratic Party (PDP) in the Sept. 19 gubernatorial election. 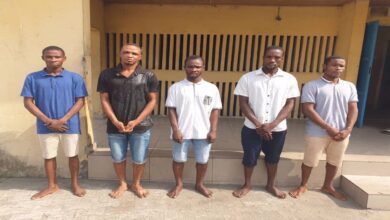