The former governor of Ekiti State, Mr. Ayodele Fayose has come under a renewed public criticism, over his recent struggle to take over the control and leadership of South West PDP from the back door.

Fayose who ceased to be Governor of Ekiti since July 2018, had his anointed candidate, his former Deputy, Prof. Olushola Eleka defeated by Governor Fayemi of the APC, rendering him politically incapacitated in Ekiti and Nigeria in general.

Fayose, who is known for political drama, had it squared up with Senator Abiodun Olujimi, who is vowing not to allow Fayose take over the control of the party in Ekiti State.

One will imagine why Fayose is fighting with everyone in his State, and South West, when he is not running for elective position nor running to be elected for a party position in the region.

According to how the constitution of the PDP was written, a provision clearly stated that, any highest ranking elected serving officer in a State, Region or country remains the leader of the party.

But this does not sit well with Fayose who is neither holding any elective post nor appointed by the party in any capacity for the region, other than being a former governor and a stakeholder.

Recall that Fayose is still battling to clear his name with the EFCC, over several allegations of corruption and stealing of public funds meant for the development of his State, during his reign as the Ekiti State governor.

Fayose, was said to be a strong ally of former Governor of Lagos State, Senator Bola Ahmed Tinubu. His public romance with the opposition leader is not even done in secret or discreetly. He has been a “very vocal voice” in defense of Tinubu’s rumoured 2023 presidential bid.

It was also alleged that Fayose was trying to uspur the power of the Oyo State Governor, Seyi Makinde, who is the highest ranking elected leader in the region, to the extent that, the elected legistalors in the region had to pass a vote of confidence and adopt Makinde officially, as their leader.

Similarly, several member of Board of Trustees of the party across states in South West came out, to throw their support behind Seyi Makinde as the leader of the party in the region, warning Fayose to steer clear of any attempt to polarize the party for his personal gain.

Fayose style has always been to whimp pubic sympathy, and stir the waters to catch a fish, unfortunately, his new quest to take what does not belong to him has been met with serious resistance, as many PDP members have already seen the end from the beginning of his plot.

A member who does not want to be named accused Fayose of attempting to do to others, what he will never take from anyone. When he was a governor, he was constantly insulting former President Obasanjo, who was the leader of the party at that time.

During Fayose’s second term in Office as the sole PDP governor in South West, he was in firm control of the party’s affairs in South West, Infact, every decision of the party were made in his office in Ekiti, so why is he now fighting Seyi, who is the new man at the helms of affairs?

At the last National Convention of PDP, Fayose and his cronies worked against all candidates from South West, just for him to continue to remain as the leading figure in the region. Fayose, a man who sees himself above and beyond anyone, and cannot stomach anything that is not under his direct control, to the point that, anything that does not seat under his control, he makes effort to destroy it, regardless of the overall interest of the people involved.

The emergence of Seyi Makinde reportedly became a source of worry to him, that he started scheming on how to displace him as the leader of PDP in the region, but people who have seen through his deception and antics are out in full force to resist him.

Seyi Makinde, a gentle man and tactful politician, has not utter any word since Fayose started his political scheming.

Fayose, who is neither a leader of South West, nor holding any key position in the party, took some disgruntled Chairmen from the region, to visit the National Chairman, Uche Secondus in Abuja. What Fayose was attempting to do was to further create bad blood amongst all the State Chapters of PDP in South West, so that he can strike with divide and rule, with ultimate goal of weakening the party structure.

In Lagos for instance, Chief Bode George was an opponent to Secondus during the last PDP National convention. The current Chairman of Lagos PDP, Mr. Deji Doherty, who was an opposition to Bode George’s candidate for Lagos Chairmanship position, is one of the Chairmen Mr. Fayose took along to meet with Secondus, to pledge their loyalty.

He didn’t waste time to cash into the crisis in Osun, to back the Eddy Olafeso’s installed Acting Chairman, Mr Sunday Akanfe, against the suspended Chairman, Soji Adagundo, who has now been cleared of any wrong doing.

He is looking at the vulnerable chairmen in each state and bringing them to his camp, to achieve his sinister moves over the party in the region.

Fayose was said to be promoting a Yoruba agenda for 2023, on behalf of his benefactor, Bola Tinubu in APC, with an intention of having most of the factional structure of PDP in various States in South West to his own camp, so that it can be easy to polarise and weaken the party.

Bola Tinubu, who had been a long standing supporter of Mr. Fayose, was reportedly said to be one of the leaders who prevailed on the embattled EFCC Chairman, Ibrahim Magu, to take a soft stand, while Fayose case was ongoing.

This is evident in the lackadaisical ways the case was being handled, with adjournment upon adjournment.

Mr. Fayose may have come up with this idea of weakening the party structure in South West, to pay back for the support he has been receiving from Tinubu over the years.

He may have also thought that, if the odds favours Mr. Tinubu, he can be rewarded with ministerial appointment, which can shoot him back to political limelight, from his current political oblivion.

Finally, the task is now before all the PDP members in South West, to rally around the authentic leader, so that the party will not be destroyed before their eyes as 2023 election gets nearer. 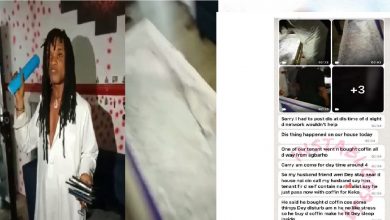 VIDEO: Suspected Ritualist Arrested After Neighbors Found A Coffin In His Apartment