The Federal government on Thursday said discussions were continuing to ensure that released and eligible N-power beneficiaries would be absorbed into government programs.

In a statement released on Thursday in Abuja by the Special Assistant of the Minister of Humanitarian Affairs, Disaster Management and Social Development, Hajiya Sadiya Umar Farouq on Media, Mrs Nneka Anibeze, said exited beneficiaries should exercise more patience and await the result of her efforts.

“We have directed Focal Persons of National Social Investment Programmes in the states to submit an updated list of the exited N-Power beneficiaries that are interested in participating in the transition plans of the ministry.

“Meanwhile, approval has been given for the payment of the outstanding stipends for the exited N-Power Batches A and B beneficiaries.

“The approval for payments for up to the month of June, 2020 for the two Batches has already been forwarded to the office of the Accountant General of the Federation (AGF) for final checks and payments.

“The only outstanding approval waiting to be forwarded to AGF’s Office is for the payment of July Stipends for batch B beneficiaries,” she said. The ministry said it had requested for the details of those affected and the reasons for their rejection from the AGFʼs office and promised to communicate that to the affected beneficiaries.

“However, if the rejection was done in error, those affected should rest assured that they will be paid all that is due to them as soon as the error is rectified by the AGFʼs office,” the statement added.

Umar-Farouq also explained that the Batches A and B N-Power beneficiaries knew from the beginning as they were informed that the programme was for 24 months.

She said the non-disengagement of Batch A beneficiaries after 24 months was done out of exigencies of the time.

The minister stated that exiting Batches A and B after 40 and 24 months respectively was in line with the conditions stipulated at the time of their enrolment.

The N-Power programme is designed to assist young Nigerians between the ages of 18 to 35 to acquire and develop life-long skills and are given a stipend of N30,000 monthly. 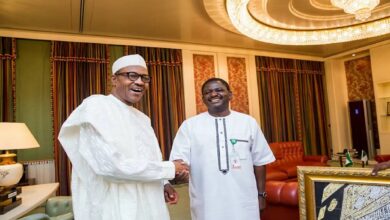 Those who divided Nigeria with evil criticizing Buhari – Presidency