There has been an uneasy lull in the Ekiti state People’s Democratic Party (PDP) branch, as a group said to be loyal to former Ekiti state Governor Ayo Fayose has split and consequently led to verbal attacks over a comment by Fayose that pointed to his plan to remove his former Deputy Professor Olusola Eleka from the state’s gubernatorial contest in 2022.

Fayose was recently quoted as saying: “there will be no” southern agenda ” in Ekiti 2022, stating that the rotation in the party was not only undemocratic, but also unconstitutional.

He claimed that ” we are on the Ekiti agenda.” Any other agenda is self-serving and negates our collective interests and fair representation. It is sponsored by weak and narrow-minded politicians and run by a political extortionist.”

In 2018, during an unsuccessful mission, Fayose unilaterally nominated Professor Eleka, who is a representative of the southern senatorial district of the state, for the Governor’s seat in an election that was lost to Kayode Fayemi of the APC.

In what appears to be a gross shock and huge disappointment to Eleka’s former Deputy Governor, an ally who craves anonymity expressed displeasure with Fayose ‘ decision to disqualify Eleka from running in the 2022 Ekiti gubernatorial election.

The Eleka ally said, “It was a friend who called my attention to the comment. At first I didn’t believe it because I was still at the Magodo residence of Oga(Fayose) last weekend and there was no insight to such decision. Then I called few associates who latter confirmed it as Osoko’s position. That is obviously unfair.”

Another member of the Fayose group said, “Some of us never trusted Fayose at anytime but for our hope in the likes of Eleka and Barr Anisulowo and few others, we decided to forge ahead. ‘On South Agenda we stand’. But if this singular struggle will set us against Fayose, so be it. We, especially, from the South Senatorial District will stop at nothing to see end to Fayose’s dictatorship in Ekiti PDP.

Also Read: Reasons Why I Turned Down 17 Honorary Degrees – Fashola

Stressing that, “it is unbelievably sad that Oga Fayose could shamelessly admitted the fact that he is indeed a ‘Political Extortionist’. He thought we are all myopic. In 2018 he told the people of Ekiti state that is it was fair enough on the account of equity to allow the South Senatorial District have their own share of representation in the governance of Ekiti and upon which we all supported his unilaterally decision of fielding Eleka and as against the population decision of the party leaders. We all supported him, but now that he has successfully extorted the poor Eleka, and has started extorting others like General Adetayo of 100 million naira, Kayode Osho, Deji Ogunsakin and others of their hard earned resources.

Can you imagine that Fayose seized the governorship ticket of the PDP and the general election to extort Eleka and ensure he was financially drained to the extent that he could not to roof the only one Bungalow he managed to build throughout his four year tenure as Deputy Governor”. She added. 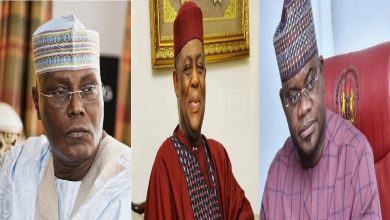