In the run-up to the 2023 presidential election, Globalgistng compiled a list of seven (7) possible candidates who could become flag bearers for the All Progressives Congress(APC).

This list is based on information obtained from sources within the ruling party.

Orji Uzor Kalu is a Nigerian Politician and businessperson. He is the chairman of SLOK Holding and the Daily Sun and New Telegraph newspapers in Nigeria, who served as the Governor of Abia State, Nigeria from May 29, 1999, to May 29, 2007.

Bola Ahmed Adekunle Tinubu, is a Nigerian politician and the current national leader of the All Progressives Congress. He had previously served as the Governor of Lagos State from 1999 to 2007.

Nasir Ahmad el-Rufai is a Nigerian politician who is the Governor of Kaduna State, in office since 2015. He was previously the Minister of the Federal Capital Territory from 2003 to 2007; and the director of the Bureau of Public Enterprises. He is a founding member of the ruling All Progressives Congress.

Oluyemi Oluleke “Yemi” Osinbajo SAN, GCON is a Nigerian lawyer and politician who is currently serving as the Vice President of Nigeria, in office since 29 May 2015.

Chibuike Rotimi Amaechi is a Nigerian politician who is currently serving as the Minister of Transportation in the cabinet of President Muhammadu Buhari. He previously served in oil-rich Rivers State as Governor of Rivers State from 2007 to 2015 and Speaker of the Rivers State House of Assembly from 1999 to 2007.

John Olukayode Fayemi, is a Nigerian politician who is currently serving as the Governor of Ekiti State, in office since 16 October 2018. He previously served in office between 2010 and 2014 before losing re-election to Ayodele Fayose.

Ahmed Ibrahim Lawan is a Nigerian senator who serves as the President of the Senate of Nigeria. He represent Yobe North Constituency of Yobe State under the All Progressive Congress. His tenure as a senator started since 2007 Nigeria general election. 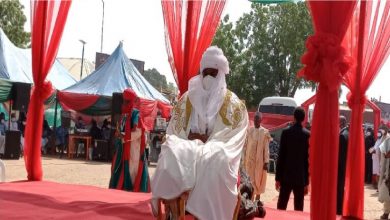