Former Governor Ayodele Fayose denies that there is any sinister motive with the trending video featuring him and the PDP ward leaders of the Ijero Council area.

According to the governor, what transpired was not an oath-taking but an expression of loyalty, Globalgistng reports.

According to his spokesman, Lere Olayinka, the video was not leaked but released to a WhatsApp platform of PDP by one Hon Dayo Akinleye.

He argued that secret things will not be recorded. Going further, he added that there is a difference between taking an oath and expressing allegiance to someone.

It was reported that Fayose had initially reacted to a purported viral video in which leaders of the Peoples Democratic Party (PDP) in the state were taking an oath to be loyal to him.

In the alleged video, PDP ward leaders and executives from the Ijero council area of the state were said to be seen pledging allegiance to the former governor.

Specifically, attendees at the meeting included a former chairman of the Ekiti PDP, Chief Bola Olu-Ojo, and a former House of Assembly member, Akinleye Ekundayo.

Reacting to the development, Fayose stressed that there was no such thing as oath-taking anywhere as claimed.

It was also reported that Fayose reacted to the recent crisis the ruling All Progressives Congress (APC) had been facing.

The PDP chieftain in a series of tweets on Thursday, June 18, described the crisis as a show of God’s anger against the party for its role in a number of issues including promoting election rigging and plunging the country into debt.

The former Governor, noting that the APC crisis will worsen, added that the party is looking the other way while Nigerians are being killed by the thousands.

He said that God would never be happy with a political party if its government did nothing to stop the bloodshed of people and the destruction of their livelihoods. 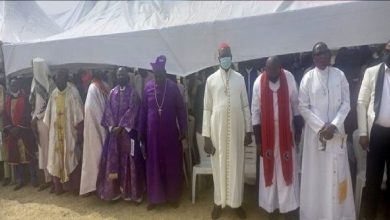 2023: Bello has been anointed by Holy Spirit to succeed Buhari – Clerics