The Nigerian, Senate president, Ahmad Ibrahim Lawan, disclosed on Tuesday, July 7, that the president in a letter asked the lawmakers to confirm Danbatta’s appointment.

Buhari has also appointed three officials as members of the Code of Conduct Bureau (CCB).

President of the Senate Ahmad Ibrahim Lawan reads a letter from Mr President requesting for the Confirmation of appointment of Professor Umar Dambatta the Executive Vice Chairman of the governing board of the Nigerian Communications Commission (NCC),” a twit from the Senate read.

Ngige, who claimed that the suspension was approved by President Buhari, stated that it was mandatory due to “preliminarily established prima facie infractions on the extant Financial Regulations and Procurement Act, and other acts of gross misconduct.”

But in what got Buhari’s administration enmeshed in another mess, Ngige’s action seems to have crossed the line with the position of Boss Mustapha, secretary to the government of the federation, barring cabinet ministers from removing heads of agencies and parastatals they supervise.

Also Read: List of 9 Ondo lawmakers that pull out of impeachment process against deputy gov

The corporation, however, said the redeployment was aimed at repositioning the government-owned oil firm for more efficiency, transparency, and profitability.

The spokesperson of the oil revenue-generating firm, Kennie Obateru, in a statement in Abuja, explains that the action was in tune with President Muhammadu Buhari’s ‘next level’ agenda. 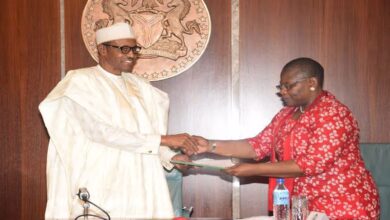