President Muhammadu Buhari meets with governors elected on the platform of the ruling All Progressive Congress (APC) at the presidential Villa in Abuja, the Vanguard report said.

Legit.ng notes that the meeting will take place just under 24 hours after Senate President Ahmed lawan met with the Nigerian leader about the party’s internal crisis.

The President met behind closed doors with the leader of the Nigerian Senate on Sunday, June 21.

This meeting was confirmed by President Buhari’s aide Bashir Ahmad, who posted this information on his personal Twitter account.

Although the details of the meeting are not yet known, it is known that the discussions will focus on the internal crisis shaking the ruling party.

Meanwhile, earlier it was reported that the APC crisis strike took a steep turn, as the top party leader insisted that Victor Giadom did not resign as Deputy national Secretary.

Speaking against the party’s NWC position, Salihu Mustafa, who is the northeast Vice-Chairman, said that Giadom was granted a waiver when he contested the position of Deputy Governor of rivers in 2019.

Mustafa’s statement came amid a speck of dust raised by the APC national chair after the suspension of Adams Oshiomhole.

Similarly, the factional national Chairman of the ruling party, Giadom, called his removal from office an accident and a weakness.

Quarrels in the leadership of the APC sharply escalated on Sunday, June 21, when the head of the ruling party of the state, rivers Giadom, was removed from office.

Giadom, who appointed himself party Chairman after Oshiomhole’s ouster was upheld by the court of appeal amid various crises in the APC, was sanctioned over allegations of gross disobedience to the APC Constitution. 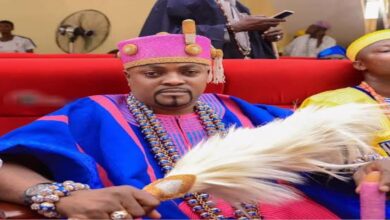