In a post on Instagram, the beautiful daughter called ajimobi her favorite dad, adding that He is God’s greatest gift to her.

She said that Ajimobi taught her so many important things that have become a very important part of her life today.

Abisola said she uses today to relive every moment she had with her father.

Abisola also thanked her father for always being available when they needed him. She added that with everything going on, she preferred to be at peace. Ajimobi’s daughter said she hopes everything she has been praying for is already happening.

Meanwhile, Globalgistng.com previously reported that Ajimobi was told to be in a coma.

The former Governor, who has reportedly been on a ventilator for some time, is fighting for his life after Contracting a coronavirus. A former Governor of Oyo who is being treated in Lagos at the first consultant cardiology hospital in ICOI, Lagos is also the Acting National Chairman of the All Progressives Congress (APC).

Churchill said that marital problems do not define the father, adding that the father is not just the father of the child.

He added that being a father also means taking care of the children around you and those who really need it.

Churchill prayed for other fathers around the world, saying that he hoped their children “will not be used as a tool of jealousy due to broken relationships, as was done in the old era.”

Tonto’s ex-husband Diken said he hopes the current time will not be one where single parenting leads to confusion.

He told all the fathers: “relax, you will reconnect with your child at the right time.” 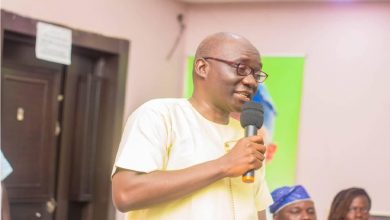 Ekiti 2022: Ikere will speak with one voice, Eleka assures PDP